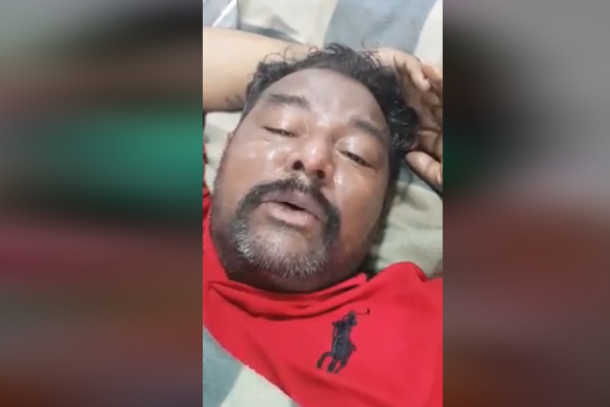 Nadeem Joseph and his mother-in-law were attacked by their Muslim neighbor a few days after the Christian family bought a house in Peshawar’s TV Colony. (Photo supplied)

A Pakistani Christian man, who was shot and wounded for buying a house in a Muslim neighborhood in Pakistan’s Khyber Pakhtunkhwa province, says he still fears for his life.

In a video recorded from his hospital bed in Peshawar, the provincial capital, Joseph said: “I am feeling scared even in the hospital. I fear my life and my family.”

He added: “I purchased the house in TV Colony a month ago. I still have to make the full payment, but Salman Khan, a Muslim man who lives opposite my house, wasn’t happy about it. He started harassing us and asked us to leave.”

On June 4, Khan and his son Suleman threatened the Christian family with Kalashnikov rifles, ordering them to vacate the house within 24 hours.

Joseph was shot in the stomach and his mother-in-law was hit in her left shoulder.

Jamshed Thomas, a lawmaker from the ruling Justice party, has strongly condemned the attack on the minority family.

“I personally visited the family and assured them of my full support and justice. I have also spoken to police officials and asked them to apprehend the assailants,” Thomas told UCA News on June 10.

“Such incidents are very rare in Peshawar, where Muslims and non-Muslims live in peace and harmony. We will not allow a handful of criminals to give the false impression that minorities are under any threat in Peshawar.”

Wazirzada, a government aide on minority affairs, also visited the injured pair and promised strong action against their Muslim attackers.

“They [the attackers] have escaped to neighboring Punjab province. A police party has been sent from Peshawar to track them down and make arrests,” Wazir told UCA News.

Most of Pakistan’s four million Christians live in slum areas of Karachi, Lahore and the twin cities of Islamabad and Rawalpindi.