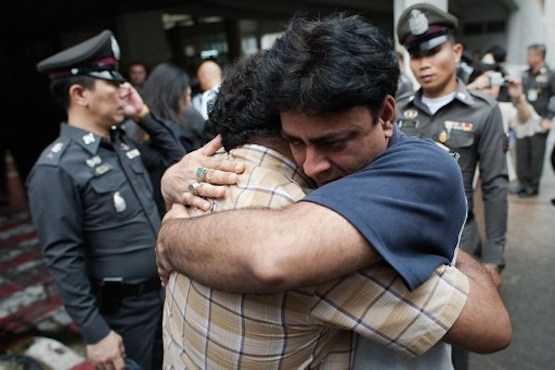 Pakistani refugees are released on bail following their detention at the Immigration Detention Centre in Bangkok, Thailand in this file photo. A detained Pakistani Christian asylum seeker died on May 27, 2017 after allegedly being denied medical assistance after complaining of chest pains. (Photo by Nicolas Asfouri/AFP)

Thai immigration authorities and the United Nations refugee agency have come under fire from Pakistani Christians after a Christian asylum seeker died in a detention center in Bangkok.

Ijaz Tariq, 34, who had been denied refugee status by the UNHRC only the day before, died on May 27 in Bangkok's Immigration Detention Center (IDC) from a heart attack, a source said.

Immigration officials refused to take Tariq to a hospital after he complained about the chest pains and he died a few hours later in his cell the source said.

"[The] death of a Pakistani Christian Asylum seeker in IDC Bangkok without any medical assistance is a violation of human rights for which the UNHRC Bangkok office and the Thailand government are equally responsible," said Dr. Nazir S. Bhatti, president of the Pakistan Christian Congress.

Tariq was arrested on immigration law violations like hundreds of other Pakistani Christian asylum seekers registered with UNHCR and denied bail, Bhatti said.

The role of UNHCR Bangkok is also questionable and in violation of U.N. refugee conventions when it fails to provide legal assistance to detained asylum seekers, or provides medical assistance to sick people who have fled persecution in Pakistan, he said. He accused the UNHCR Bangkok office of hiring Muslim translators who wrongly interpret Pakistani Christian asylum seekers during interviews, which end in their failure to present true stories and evidence. Ijaz Tariq was denied refugee status on May 26, 2017 by UNHCR Bangkok office due to misinterpretations by Sunni Muslim Pakistani translators hired by UNHCR, Bhatti said, adding he would take the case to the U.N. Human Rights Commission in Geneva.