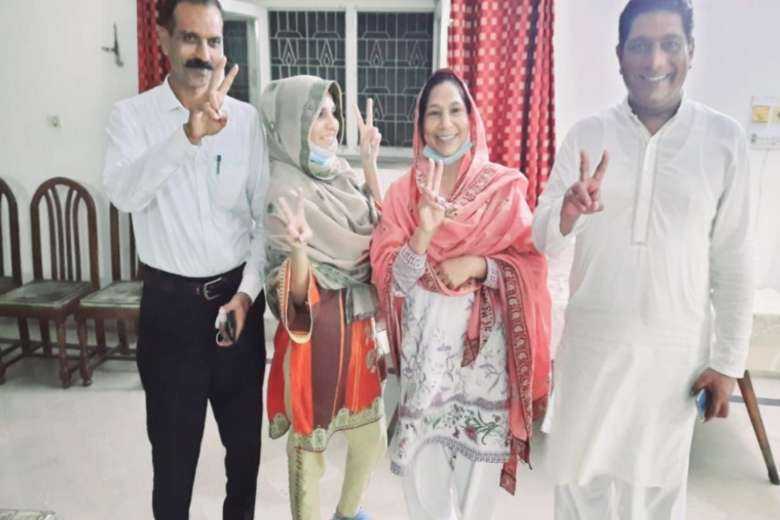 Church officials are urging caution following the granting of bail to two Christian nurses convicted of blasphemy in Pakistan.

Faisalabad Additional Sessions Judge Shahzad Ahmad granted bail to staff nurse Mariam Lal and student nurse Newish Urooj on Sept. 23. The news only became public on Nov. 19 when a Christian advocate shared a photo of them showing a victory sign.

The nurses were detained by police in April after a first information report under section 295-B of the blasphemy law was made by Dr. Mirza Muhammad Ali of Civil Hospital, Faisalabad, who accused them of scratching a sticker inscribed with “Durood Shareef,” a salutation for Prophet Muhammad.

“The prosecution failed to prove intentional defiling of the Quran inscription. There was no witness who had seen the two women committing any disgraceful act with the sticker. Charging someone with blasphemy for simply holding a religiously inscribed sticker is not sufficient evidence,” stated the judge who ordered their release on surety bonds of 100,000 rupees (US$571) each.

They are safe but can’t return to their houses. We have our reservations as the case is still under trial

“It was a hidden joy. This is the first time the lower court has granted bail to a blasphemy convict. We are fighting it peacefully with faith and courage. The nurses were falsely accused,” he told UCA News.

“They are safe but can’t return to their houses. We have our reservations as the case is still under trial. We are trying to avoid the mob in court and the anger. Our city has witnessed tragedies in the past. We are afraid and worried for our own safety.”

Atif Jamil Pagaan, a Catholic lawyer, praised Bishop Indrias Rehmat of Faisalabad and his team of priests for leading the case.

“None of the Christian political leaders joined the cause. We avoided social and print media while the nurses were behind bars. Anything can happen as the lives of our team, the accused and even the judges are at stake,” he told UCA News.

“The case is in favor of the nurses if everything goes smoothly. The head nurse Rukhsana stated in the first information report that she saw the sticker in their hands. It doesn’t prove the intention of blasphemy. Neither had they repeated the alleged offense.”

The news of the freed Christian nurses broke a day after the government released Saad Rizvi, leader of Tehreek-e-Labbaik Pakistan, from detention on Nov. 18. The radical Islamist party campaigns on the single issue of defending the country’s blasphemy law.

Blasphemy is a serious allegation in Pakistan, where the mere allegation of insulting Islam has led to mob attacks and the murder of religious minority members. According to the Lahore-based Centre for Social Justice, the highest number of blasphemy accused (200) was reported last year.

In 2010, two Christian brothers — Pastor Rashid Emmanuel and Sajid — were gunned down on the premises of the Faisalabad sessions court. Both had been cleared of blasphemy charges.

In 1992, Nehmat Ahmar, a Christian teacher from Faisalabad, was brutally killed in a knife attack after being accused of blasphemy by a 24-year-old student.