Asma Jahangir was a fearless campaigner for human rights, particularly those of women and minority groups 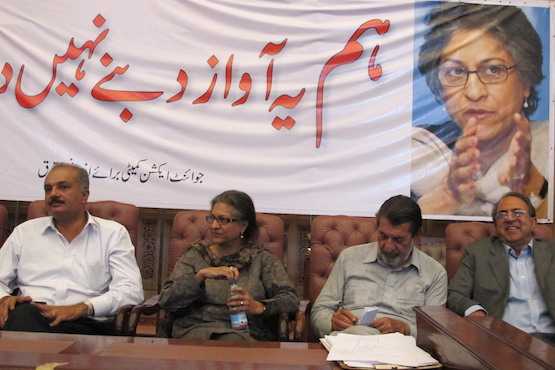 Asma Jahangir tells a press conference in Lahore in June 2012 of her belief that Pakistan's military were planning to kill her. (Photo by Kamran Chaudhry)

The Catholic Church in Pakistan has joined the nation in mourning the death of Asma Jahangir, an iconic rights activist.

Known for fearlessly supporting women and minority groups, she criticized draconian anti-blasphemy laws as well as the politicization of state institutions.

Jahangir, 66, died of a cardiac arrest in the northeastern city of Lahore on Feb. 11, her family said.

Frequently branded an "enemy of the state" and anti-Islam, Jahangir provided free legal aid to peasants seeking the return of land occupied by the military.

She identified as a Muslim but was said by various opponents to be linked to the Ahmadiyya sect, which is not accepted by some groups as being Islamic.

She was a co-founder of the Human Rights Commission of Pakistan.

She was imprisoned in 1983 for spearheading the first public demonstration against the repressive regime of General Muhammad Zia-ul-Haq.

Jahangir was instrumental in a campaign that resulted in Pakistani women acquiring the right to marry of their own free will in 2003.

A former UN special rapporteur on freedom of religion or belief, she also campaigned against capital punishment.

Jahangir was bestowed with awards that included the Unesco/Bilbao human rights prize.

In 2012, she demanded government protection amid allegations that personnel of the Pakistan military's powerful Inter-Services Intelligence agency were plotting to kill her.

President Mamnoon Hussain and Prime Minister Shahid Khaqan Abbasi have expressed condolences over her death and lauded her defense of human rights.

"The best tribute to her is to continue her fight for human rights and democracy," she tweeted.

Father Bonnie Mendes, a former executive secretary of the Pakistani Bishops' National Commission for Justice and Peace, praised her stand against family "honor killings" of women and girls.

He also noted her successful defense of several Christians charged with blasphemy for allegedly offending Muslims.

Father Pascal Robert, a professor at the National Catholic Institute of Theology, met Jahangir for the first time in 1985.

She bravely defended the poor, he said of the woman who is even being mourned by many Pakistanis who were her foes.