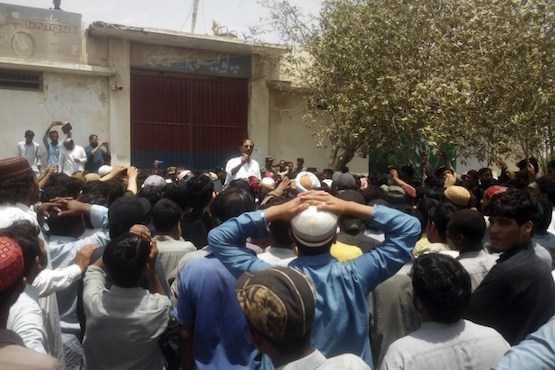 Pakistani protesters gather outside a police station during a demonstration against a Hindu man charged with blasphemy in the town of Hub in southwest restive Balochistan province on May 4. In a more recent case, a 16-year-old Catholic boy was arrested by police in a city in Punjab province on July 13 following allegations of blasphemy. (Photo by AFP)

A Catholic family in Pakistan has fled their home fearing attack by local Islamists after their eldest son was arrested on blasphemy charges on July 13.

"We left the city same evening the clerics captured him," Shfaaqt Masih told ucanews.com. "I switched off my phone fearing they will trace my family."

Shfaaqt, whose name Masih is not a surname but identifies him as a Christian male, said that local police station will not tell them where 16-year-old Shahzad is currently being held.

"My relatives even visited the jail but he is not there. We don't know what to do," he said.

The father of four has been hiding since Shahzad was taken into custody for allegedly insulting the Prophet Mohammed, a crime that carries a mandatory death sentence in Pakistan.

Shfaaqt, a builder, is liaising with his parish priest in the hope to somehow resolve the situation. "We are poor people and I am out of work now. The clerics did not listen to our please; they will kill my son," he said.

Shahzad worked as a sweeper in a hospital of Dinga City, Punjab province, where a Muslim shopkeeper accused him of blasphemy. He was later taken to a madrassa (Islamic seminary) by activists from the Islamist party Tehreek-e-Tuhafaz Islam Pakistan and was then arrested by the police.

More than 50 party activists later protested in front of the police station.

Dinga has a population of about 80,000 people of whom 150 are Christians who live in a Christian colony near the city's railway station.

In response to the allegations, an X-marked photo of Shahzad is now being shared on social media captioned laanat (shame).

"We brought him to my shop and he repeated the same insulting remarks ... he has hurt our feelings and tried to disrupt the peace in the area," stated Ahmad in the first information report made with the police.

Ghazi Saqib Shakeel Jalali, from Tehreek-e-Tuhafaz Islam Pakistan said, "We will not forgive even if the court releases him. We are not cowards."

The law, said Jalali, tried to "make an example out of Mumtaz Qadri," referring to Malik Mumtaz Hussein Qadri, a police bodyguard, who was executed last year for assassinating Punjab governor Salman Taseer over his opposition to the country's blasphemy laws.

"What will we tell our generations that we could not save a person who loves the Prophet? We will continue preaching the love of the Prophet," said Jalali.

Meanwhile, Christian NGOs are lobbying with politicians from minority religions to support Shfaaqt and his family. Lahore based Center for Legal Aid, Assistance and Settlement CLAAS plans to visit Dinga city this week. Joseph Francis, director of CLAAS shared about challenges in dealing with blasphemy cases.

"A famous televangelist has now jumped to the occasion and gives refuge to the victim's families. However, they have complicated the case by approaching courts for a bail plea," said Francis.  "This further pressurizes police. The victims are then usually left on their own. We shall struggle for Shahzad's freedom during the ongoing police investigation," he said.

Kashif Nawab, a patron of Minority Rights Watch, plans to offer legal support. "An assistant sub inspector lodged the FIR though law clearly states that no police officer below the rank of superintendent can investigate cases involving derogatory remarks in respect to the Prophet," said Nawab.

"The government should also establish a committee of religious leaders and police to probe and handle such issues," he said.

Both church and civil society have been demanding a repeal of the controversial blasphemy laws which, they say, are being used to settle personal scores and persecute religious minorities.

According to the Human Rights Commission of Pakistan, 15 people were charged with blasphemy last year. These include 10 Muslims and five non-Muslims. Two Muslims and as many Christians were sentenced to death for blasphemy in 2016.

The state has however not carried out an execution for blasphemy but several people accused of blasphemy have been killed, some in prison or before trials ended. Blasphemy against the Quran is punishable with life imprisonment.

More than 95 percent of Pakistan's 180 million people are Muslims. Less than 2 percent are Christians.