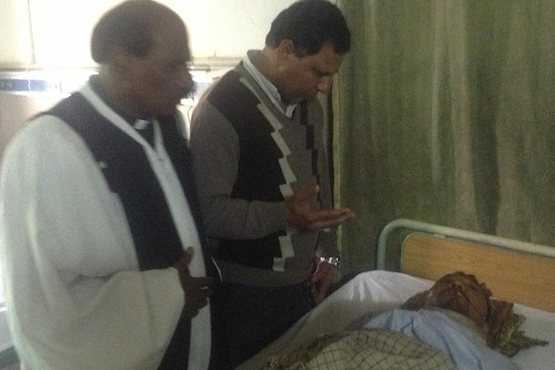 Pastor Emmanuel Khokhar (left) and Pastor Amjat Niamat, the moderator at Lahore Presbyterian Church of Pakistan (middle), pray for Sajid Masih as he recovers from his injuries while under police guard at Mayo Hospital of Lahore on Feb. 24. (Photo by ucanews/Amjat Niamat)

A Christian youth is in critical condition after he attempted suicide while being investigated for a blasphemy case in a village neighboring Lahore, the capital city of the Pakistani province of Punjab.

The man claims he was being punished for an act committed by his cousin and that security authorities had ordered the two men to engage in a homosexual act as they attempted to force confessions from them both. Critics say police duress in such cases is common in Pakistan.

Sajid Masih, 24, jumped from the fourth floor of the Punjab headquarters building of the Federal Investigation Agency (FIA) on Feb. 23 while he was being interrogated with his cousin.

The cousin, Patras Masih, 18, was arrested on Feb. 19 for allegedly posting an insulting photo of the burial place of the Prophet Muhammad on a Facebook account.

The families of the accused, along with hundreds of Christian villagers from Shahdara town, reportedly fled their homes last week fearing reprisals and mob attacks.

Masih is being treated at Lahore's Mayo Hospital under police guard. When a ucanews.com reporter attempted to meet and interview Masih he was denied access. Hospital authorities referred to Masih as "a criminal."

However he was still able to post comments on social media.

"They called me to check my mobile. I was beaten and taken to a bathroom. I asked what was my mistake, and they replied that I was his cousin," a severely injured Masih said in one video post he shared on social media.

"I was asked to damn myself by calling myself laanti (the damned). They forced me to call my cousin the same name. Later they asked me to pull his pants down and sodomize him. I refused," he said in the post.

"Seeing their growing anger, I noticed an open window and decided to jump out of it. They found nothing [incriminating] on my mobile." In a separate case, Pakistani policemen stand guard outside a central jail where an anti-terrorist court gave a verdict against suspects accused in a blasphemy lynching case in Haripur district on Feb. 7, 2018. A court sentenced one person to death and five others to life imprisonment on Feb. 7 for lynching a student accused of blasphemy in a highly-charged case that sent shockwaves throughout the conservative Muslim country. Last April, Mashal Khan, 23, was stripped, beaten and shot by a gang of mostly students before being thrown from the second floor of his dorm at the Abdul Wali Khan University in the northwestern city of Mardan. (Photo by AFP/ Aamir Qureshi)

The Catholic Cecil & Iris Chaudhry Foundation (CICF) has called for an investigation into the "brutal treatment" meted by the FIA's cybercrime wing. The two young men were handed over to the department on Feb. 22.

"We are outraged, shocked and horrified by the alleged behavior of the FIA officials. We demand that this incident be investigated at the earliest date and firm action be taken against those involved. These acts of brutality cannot not be overlooked," CICF president Michelle Chaudhry said in a statement dated Feb. 25.

"A fair trial is every citizen's right regardless of faith, caste or gender. This kind of extreme hostility and inhumane behavior during investigation is unacceptable and uncalled for, and has to end," she said.

"He is vulnerable and needs immediate treatment. We condemn these inhumane methods of investigation," Father Bernard told ucanews.

"We request that the chief justice appoint only the senior superintendent of police and officials of a higher rank to investigate suspected blasphemy cases before registering a report," he said.

"Both the accused and the plaintiff must be kept behind bars until it has been proven who is guilty. The same punishment should be awarded for issuing a false allegation. I know both of these demands will not be met, but we will keep repeating them [every chance we get]."

Blasphemy is punishable by death in the Islamic Republic, which has a history of prejudicial murders of Christians accused of this crime.

A Christian who was on trial in 1994 under Pakistan's blasphemy law was killed and three others injured when a trio of motorcyclists shot them at a bus stop.

A decade later, laborer Samuel Masih was struck and killed by a policeman wielding a hammer while he was being investigated in a blasphemy case.

In yet another notorious case, suspected Islamic extremists gunned down two Christian brothers who had been cleared of blasphemy charges in 2010.

Four years later a policeman shot a Christian and a Muslim in jail who had been accused of blasphemy.

Now Christians nationwide are taking to social media to protest against this ongoing persecution.

Overseas, the Colosseum in Rome was lit up in red on Feb. 24 as a sign of solidarity and support for persecuted Christians around the world.

The event, organized by Aid to the Church in Need, a Pontifical Foundation that supports suffering Christians in over 140 countries, included testimonies of families who have been targeted for their Christian faith.

These included the husband and youngest daughter of Asia Bibi of Pakistan, who received a death sentence in 2010 for alleged blasphemy.

Her two relatives were also earlier granted an audience with Pope Francis, who told the daughter: "I think often of your mother and I pray for her."