The observance of the Year of St. Joseph was announced by Archbishop Joseph Arshad in a special video message on Jan. 12. (Photo: YouTube)

The Catholic Bishops' Conference of Pakistan has announced that it is dedicating 2021 as the Year of St. Joseph.

The year-long observance was announced by Archbishop Joseph Arshad, president of the bishops’ conference, in a special video message on YouTube channel Ave Maria Catholic TV on Jan. 12.

“Blessed Pope Pius IX had also declared a Year of St. Joseph in 1870 as patron of the universal Church, and to celebrate the anniversary we in our diocese also began this year on January 1, 2021, so that we may give more reverence to St. Joseph and change our lives,” the prelate said in his message to the faithful.

Archbishop Arshad lauded St. Joseph as a tender and loving father who cared for Jesus and his family, adding that he was a righteous man who followed the will of God and contributed to our salvation.

“Being an ordinary carpenter, St. Joseph worked hard and cared for his family so that the work God had handed over to the Child Jesus may be done. As head of the Holy Family and the protector of Mother Mary and Jesus, in the same way, he is protector and defender of the Church and of the poor, the needy and all the suffering humanity. And he is with every one of us and takes us to Jesus, whom he had led and protected,” the archbishop said.

“As we are celebrating the Year of St. Joseph, the role of parents and especially of fathers is very important to us. Therefore, as the head of the family and following the footsteps of St. Joseph, the father has to care for and protect his family.”

At the end of his message, Archbishop Arshad prayed that the Year of St. Joseph be blessed for all people, their families and the Church. 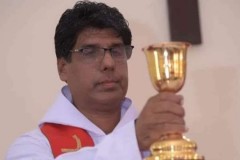 Protest over massacre of Hazara in Pakistan