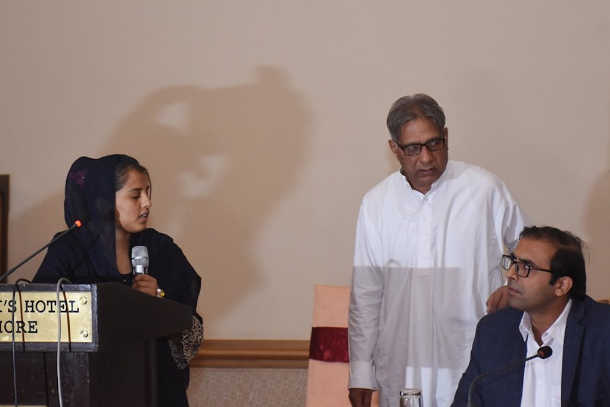 Father Morris Jalal felt alarmed when one of his catechists shared the news that a young female member of his church in Lahore, in Pakistan's Punjab province, was about to marry a Chinese businessman, especially in light of recent stories about human trafficking between the two countries.

The Capuchin priest immediately summoned the woman's family to his parish office.

"Her mother, a housemaid, was quite adamant in arguing that her daughter's foreign fiancé had converted to Christianity," Father Jalal told ucanews.com.

"They'd even accepted 80,000 rupees (US$530) from him, including the hospital expenses for a 23-year-old member of their family who had recently been injured in a motorbike accident," he said.

The priest decided to meet the Chinese man to assess whether his intentions were genuine.

"I asked him to make the sign of cross, and he had no idea what that was. Later, the girl confessed she'd only agreed to the wedding to support her disabled father," he said.

Loath to see an innocent young woman exploited, Father Jalal threatened to report the family to the police as possible accessories to human trafficking.

Upon hearing the news, over 400 locals in Lahore's Mariam Nishat Colony gathered at the priest's office this January. One parishioner even started broadcasting about the incident live on Facebook.

"The Chinese man gave the family an ultimatum: return my money or hand over the girl. So I took advantage of the fact we had a large (Muslim) crowd supporting us," Father Jalal said.

"I spoke up about similar cases of abuse against Christian teenagers in our country (by foreigners), and the man left town within two days," he added.

"After consulting with our parish council, I paid him back the 80,000 rupees and in the process saved a poor soul. A few weeks later, we learned that he had wed another girl in Faisalabad city (also in Punjab)," the priest noted.

"Clearly he just wanted to find a wife as quickly as possible. And in such phony marriages as these, there can be no genuine sense of commitment or love."

Catholic Churches in Pakistan are also warning parishioners against falling victim to this trend, which has skyrocketed with the growing influx of Chinese traveling to the Islamic Republic to work on projects related to the China-Pakistan Economic Corridor (CPEC), a 60-billion-dollar project that was launched in 2015.

The CPEC encompasses a planned network of roads, railways and energy projects linking China's resource-rich Xinjiang Uyghur Autonomous Region in the west of the country with Pakistan's strategic Gwadar Port on the Arabian Sea. Cracking down on traffickers

Earlier this May, the Federal Investigation Authority (FIA) arrested suspected members of a prostitution ring during a crackdown launched across Punjab province.

They included more than 40 Chinese nationals and eight locals suspected of being employed to help them broker transnational marriages. The abettors include lawyers, religious leaders, and translators.

According to media reports, the gang operates marriage bureaus in China.

Saleem Iqbal a Lahore-based activist who provides legal aid to Christian girls seeking to divorce their Chinese husbands, claims the gang charges its Chinese "clients" between US$130,000 and $165,000 for a Pakistani bride.

"The ringleader usually pretends to be an expert who has been hired to complete a CPEC power project in the area," he said.

"The newlyweds then stay in rented flats for a month while the bride learns some Mandarin and prepares her travel documents," he said.

"The gangs even prey on girls with mental and physical disabilities. But it seems like no one pays any attention if they are Christian girls," he added. "Our cries are only heard when Muslim girls started registering complaints against the Chinese."

At the end of May, a court in Lahore remanded several Chinese gang members over alleged fake marriages, forced prostitution, and organ harvesting involving Pakistani girls in China.

The case was due to be heard on June 10.

China's Ministry of Public Security has sent a task force to cooperate with Pakistani authorities in their crackdown against human traffickers.

"If any (Chinese) organization or individual commits a crime in Pakistan under the banner of cross-border marriage, China supports Pakistan in cracking down on it in accordance with Pakistan's laws," a spokesperson for the Chinese embassy said in a statement issued May 10.

However, the statement added that some of the reports had been fabricated and called for more responsible reporting from the media.

The Chinese embassy has also refused to dispense visas to 90 Pakistani women who planned to travel to China with their spouses.

During his recent visit to the country, Chinese Vice President Wang Qishan remarked on the strength of the bilateral relationship and expressed hope they would continue to safeguard each others' interests.

Meanwhile, videos from Pakistani-Chinese couples are now surfacing on social media to counter the claims of sham marriages.

Zhao Lijian, deputy chief of mission (DCM) for the Chinese embassy in Pakistan, recently shared a video of a girl sitting comfortably with her Chinese husband while narrating a story about their happily married life.

"These are lies that Pakistani girls are being trafficked to China for forced prostitution or the sale of organs," he tweeted.

"Most marriages between China and Pakistan are good. Illegal marriage brokers shall be punished — not brides and bridegrooms."

Zhao said China was investigating 142 cases of transnational weddings that were registered last year to determine whether they were authentic.

The FIA believes about 1,500 young Chinese have married Pakistani girls to date, with most of the victims belonging to poor Christian families from central Punjab.

Father Jalal described the videos promoted by the embassy as fake, scripted pieces of propaganda.

"Most of the women seem harassed. Some were lucky to escape and file complaints with the Pakistani High Commission," he said.

"I personally know of one woman who was raped by five men upon reaching China. Another victim from Faisalabad got pregnant and is now living with nuns in Lahore, where she is receiving psychological support," he added.

"Owing to diplomatic pressure, many affected families have refused to speak to the media or share their stories at awareness seminars. They are trying to prevent their daughters from being stigmatized by our society."

According to Human Rights and Minority Affairs Minister Ijaz Alam Augustine, two pastors have been arrested from Faisalabad for issuing fake baptism certificates to Chinese nationals. The Chinese are presumed to have used these to convince their fiancées' parents that they had genuinely converted to Christianity, in order to facilitate their marriages.

"These so-called pastors belonged to unregistered ministries. The marriages were hidden and urgent, and the conversions were carried out in the blink of an eye," the minister said.

"I blame this on greedy parents selling off their daughters without any real verification of who their suitors are," he added.

"This issue has been raised at the National Assembly. We are now cancelling these controversial marriage deeds that were registered at union councils."

"The Chinese government may be in denial, but there is already a body of evidence regarding organized crime. We demand a transparent investigation without any political influence," Jilani said.

"The benefits of being a friendly state should not include ignoring victims who need access to justice," she added, citing the lack of communication between the two sides on this issue as a major obstacle to helping Pakistani girls who are trapped in China return home.