Human Rights Commission of Pakistan blames the government for the tragedy 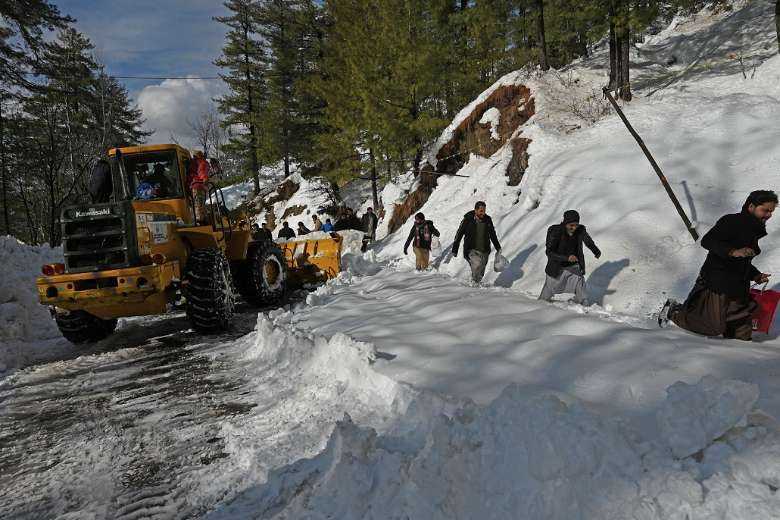 Workers use heavy machinery to clear a road following a blizzard that trapped visitors in vehicles along the roads to the resort hill town of Murree, 70 kilometers northeast of Islamabad, on Jan. 9. (Photo: AFP)

The death toll from heavy snowfall and asphyxiation in trapped vehicles in a Pakistani hill town has risen to 23, rescuers said.

A four-year-old girl suffering from severe cold and pneumonia was among 11 children who have died since thousands of vehicles were stranded as tourists rushed to view the winter snowfall at the popular Murree hill station at the weekend.

Several activists blamed the apathy of local people for the deaths.

“Boiled eggs for only 500 rupees (US$2.85),” James Rehmat, executive director of the Ecumenical Commission for Human Development, said in a social media post.

“A room of 3,000 rupees was rented for 40,000 rupees in Murree. Heater was rented for 1,000 rupees an hour and tires were wrapped in chain for 5,000 rupees. The helpless people trapped in snow were pillaged just like war booty. Are we humans?” Ansar Burney Trust said on the charity’s Facebook page.

The Human Rights Commission of Pakistan (HRCP) blamed the government for the tragedy.

“HRCP mourns the deaths of tourists in the absence of an early warning system and subsequent traffic regulation by the authorities. That the government failed to rescue them in time reflects poor governance and warrants an immediate inquiry,” stated HRCP in a tweet.