Weak preventative measures, displacement and lack of education all contributing to the increase 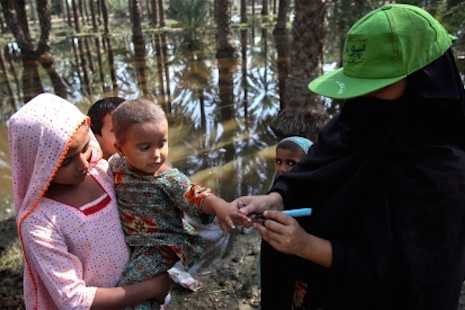 A health worker marks the finger of a child after administering a polio vaccination in Khairpur district, Sindh province (Photo by Asad Zaidi/UNICEF Pakistan)

Pakistan is heading for one of its worst years for polio in recent times. According to figures from the Global Polio Eradication Initiative (GPEI), 166 cases of polio have been verified this year, compared to 28 at the same time last year.

This puts the country at significant risk of crossing the 199-mark officially recorded in 2000, or the 198 seen in 2011. It is a major setback for a country that as recently as 2005 saw fewer than 30 cases and seemed on track for polio eradication. Last year there were 93 cases in the country, according to the GPEI.

“Pakistan presents one of the most complex polio eradication environments in the world,” Ban Khalid Al-Dhayi, spokesperson for UN Children’s Fund (UNICEF), told IRIN. “In the areas that remain with poliovirus, there is inaccessibility, violence, misconceptions and misinformation that circulates every day, along with intricate tribal and cultural norms and systems.”

“Massive daily population movements” were also described as a major problem by UNICEF.

Al-Dhayi said the recent movement of more than one million internally displaced persons (IDPs) following the military operation in North Waziristan Agency had raised fears of the virus spreading to areas which had not previously seen infections. More than 400,000 children were vaccinated at transit points as they moved out of the conflict zone in FATA and settled in host communities in KP, Punjab and Sindh. IDPs who settled in parts of Punjab due to ongoing floods could also increase risks.

While KP health officials based at the Provincial Polio Control Room (PPCR) in Peshawar agree the IDP influx poses a polio risk, they disagree, according to media reports, that refusals (individuals refusing to be vaccinated) are declining, and blame UN communications authorities for this.

According to PPCR data, the number of refusals increased from 4,200 during the polio vaccination drive carried out from June 6-8, to 12,043 during the campaign that ran from June 23-25. UNICEF, however, says they have separately seen a sharp fall in the rate of refusals, and claim successes for social mobilization and awareness raising.

IDPs themselves appear keen to receive the drops: “I was desperate for my three young children to get them, and queued up with many others when vaccinators got here,” said Aziz Dawar, who fled North Waziristan in mid-June. He told IRIN his three children aged 2-8 had until now received no vaccinations.

Elsewhere, some Pakistanis are struggling against negative rumors about the vaccination.

Azra Bibi in Bannu had to battle her parents-in-law to get her two daughters vaccinated.

“They said the drops would make them sterile, but I spoke to doctors and also school teachers who are educated, and I know this is a lie,” said Azra, who now regularly visits an IDP camp to encourage mothers to vaccinate against polio.

“We keep hearing of more and more cases,” she said. “Why don’t we do something to stop our children from being crippled by this terrible disease?”

On 1 June, Pakistan enforced a WHO recommendation that anyone travelling overseas from Pakistan had to produce certification that they had received polio drops, to prevent the export of the virus.

Prior to this move, the emergency coordinator for polio eradication in Pakistan, Elias Durry, explained to IRIN that Pakistan had “informally been labeled” as an “exporter of polio” when strains of the virus originating from the country were found in China, Syria, Egypt, Israel and Palestine. “There needs to be no more import/export of polio virus for at least six months,” Durry said.

While officially polio teams are set up at airports to administer vaccination drops, in reality implementation has been reportedly patchy, with travellers saying they had been able to travel without receiving the drops.

“It’s all just on paper. No one really bothers with drops or certificates in reality,” an official who asked not to be named told IRIN from Lahore Airport. Shortages of vaccines have also held back anti-polio campaigns.

Responding to this, NHS minister Saira Afzal Tarar told IRIN: “A loan from the Islamic Development Bank that I had been campaigning for has now been obtained, so we should be able to deliver drops more efficiently.” The minister said the precise loan details, including the amount, were still being finalized.