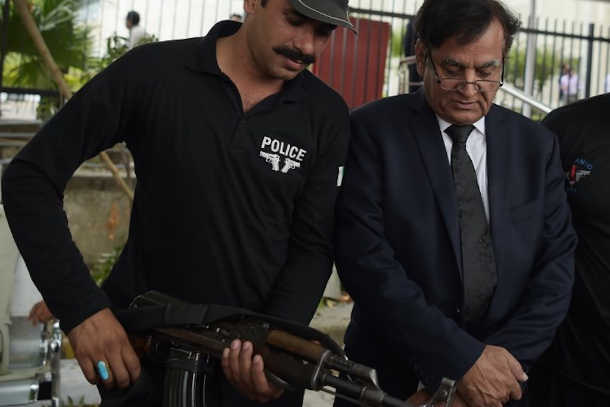 A policeman escorts Saiful Mulook, the Pakistani lawyer of Christian mother Asia Bibi, as he leaves the Supreme Court after the final hearing in her appeal against a blasphemy case in Islamabad on Oct. 8. Pakistan's Supreme Court said it had reached a judgment but would announce the ruling later. (Photo by Aamir Qureshi/AFP)

Pakistan's Supreme Court said on Oct. 8 it has reserved its verdict in the final appeal by Catholic mother "Asia" Bibi to escape capital punishment in a blasphemy case that began with a dispute with field workers a decade ago.

Chief Justice Saqib Nisar headed the three-member court bench that heard her long-awaited appeal after she was handed the death sentenced in 2010 under the country's draconian blasphemy laws.

Justice Asif Saeed Khosa and Justice Mazhar Alam Khan made up the rest of the bench.

When asked if Asia Bibi was a Christian preacher, her lawyer Saiful Mulook responded, "She has never been a preacher."

After hearing the arguments from both sides the court reserved judgment and said it would announce its verdict later. No date was given.

Chief Justice Nisar said the delay was "for reasons to be recorded later" and warned the media to refrain from commenting on or discussing the case until the verdict has been delivered.

If her appeal is rejected, her final recourse will be to seek clemency from Pakistan President Arif Alvi who has risen to power along with newly elected Prime Minister Imran Khan.

The mother of five from a small village in central Pakistan has spent nine years behind bars after a fight broke out after with her Muslim co-workers over a cup of water while picking berries on June 14, 2009.

Asia Bibi claims one of the women attacked her for "dirtying" the drinking water because she was not a Muslim, to which she reportedly fired back, "What did your Prophet Mohammed ever do to save mankind?" This sparked another confrontation a few days later that saw her beaten and dragged before a village imam who gave her an ultimatum: Convert to Islam or die.

The case has made headlines around the world and even led Pope Benedict XVI to urge Pakistan to drop the charges against her.

Prior to yesterday's announcement, Mulook pleaded to the judges to set aside her conviction on the basis that the complaint against her was not filed until five days after the alleged altercation, and was filed the imam of a mosque who had not even been present when it reportedly occurred.

"There were contradictions regarding how the notice of the incident was taken. Moreover, no permission was sought from district officials or police to legally register the complaint," he said.

On the day the news of the verdict being delayed was released, a petition surfaced online seeking 500 signatures to push for Asia Bibi's immediate release. Shortly after it was uploaded it had received three times this target. Another petition started by a British woman in 2015 on social action website change.org garnered over half a million signatures.

As of Oct. 8, the defendant's name was among the top trending words on Twitter in Pakistan as support continued to pour in for the jailed Catholic woman.

"Over 71 years since Independence it's time for Pakistan to move on from its contentious blasphemy laws introduced by Britain during the British Raj and inherited by Pakistan at the time of partition. Praying that humanity and compassion prevail at the SC tomorrow," tweeted Sayeed Warsi, a British lawyer and former co-chair of the Conservative Party.

Rights activist Kashif Chaudhry also threw his two cents into the debate raging through the Twittersphere.

"In a few hours, Asia Bibi's final appeal will be heard by Supreme Court. Let's hope sanity prevails and the poor Christian mother of five is reunited with family. The real blasphemy here is the pain through which Asia has been put through. Prayers are with her," he wrote.

"Last chance for Pakistan to right the wrong it did," tweeted Naila Inayat, a female rights activist.

In a statement shortly after the hearing, Khadim Hussain Rizvi, head of the hard-line Sunni group Tehreek-e-Labaik Pakistan, said no blasphemer could escape punishment regardless of the verdict.

Anyone who attempts to save a blasphemer would face the wraith of the public, he said, implying vigilante justice could supplant the court's decision if the appeal goes in Asia Bibi's favor. 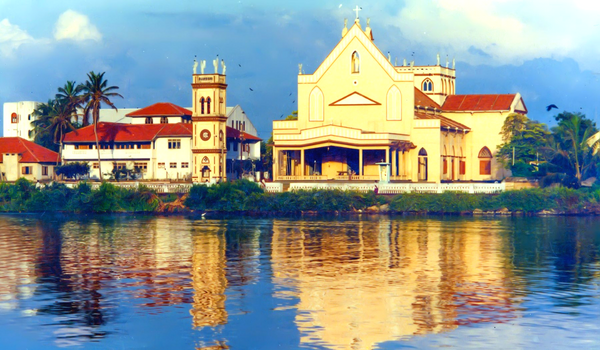