All six places of worship are in Abbottabad, where Osama bin Laden was found and killed in US raid 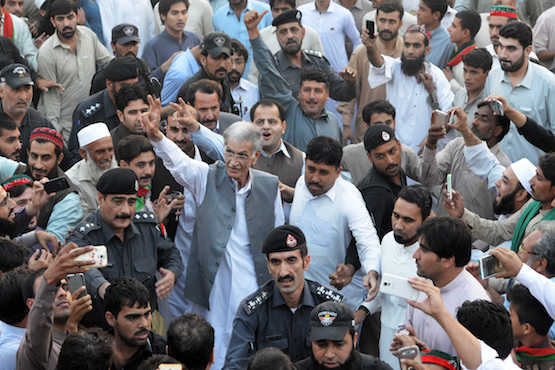 The provincial government of Khyber Pakhtunkhwa, which is led by Chief Minister Pervez Khattak (center hand raised), has been criticized for prejudicial behavior toward religious minorities. (Photo by A. Majeed/AFP)

The home-based churches are in Abbottabad, the city where Al Qaeda chief Osama bin Laden was found and killed in a raid by U.S. Navy Seal commandos in 2011.

The surprise ban, which came shortly after the U.S. placed Pakistan on a special watch list for severe violation of religious freedom, angered minority leaders and rights activists who called the move discriminatory.

The ban was overturned by Khyber Pakhtunkhwa Speaker Asad Qaiser when the matter was taken up by opposition lawmakers in the provincial assembly.

"All churches have got verbal permission to reopen and worship according to their religious faith and beliefs. We are expecting to get a written order soon," Pastor Christopher Shakar said in a statement.

"We are grateful to everyone for being with us when we were facing difficulties to worship our Lord. God has proven once again he is always with us."

According to the pastor, Sunday services were also held at the churches.

Basharat Khokhar, a minority rights activist, had condemned the Khyber Pakhtunkhwa government for its prejudicial behavior toward religious minorities.

"On one hand, the government wants to pay billions of rupees to Muslim clerics, while on the other hand it is shutting down Christian worship places," Khokhar said.

On Jan. 18, Khyber Pakhtunkhwa Chief Minister Pervez Khattak approved a plan to provide a monthly stipend of 10,000 rupees (US$100) to thousands of Muslim prayer leaders in a scheme that will cost 3 billion rupees.

Father Arshad Nayer, a local Catholic priest, said the government "would give a bad message to minorities" if it did not withdraw its decision to close the churches.

"Instead of providing security for the said churches, the administration has found it convenient to shut them down," he said.

A minority rights activist, requesting anonymity, said there are mosques in almost every street of the country.

"Can the federal or provincial governments dare to close a single mosque on the pretext of registration or security threats?" he questioned, adding that there are double standards when it comes to application of law in the Muslim-majority country.