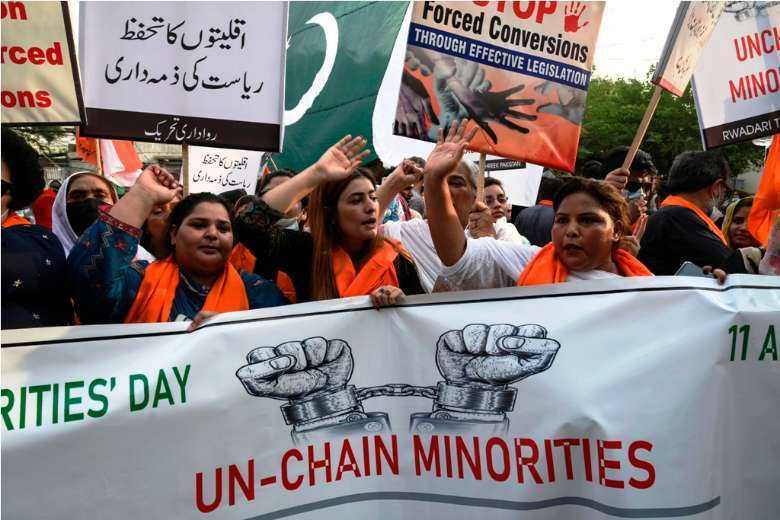 Religious minorities in Pakistan suffered a major setback with a parliamentary committee rejecting an anti-forced conversion bill on Oct. 13.

Lawmakers from minority communities protested the decision and a heated exchange ensued between parliamentarians of opposing views after the Committee to Protect Minorities from Forced Conversions disposed off the draft bill citing public interest.

“We are serious about [addressing] the problem of forced conversions. The law on the subject, however, was to be formed to address the issue and not for getting appreciation from an international organization or an NGO,” said Ali Muhammad Khan, the junior federal minister for parliamentary affairs.

The bill, which proposed legalities for only “mature” non-Muslims to convert to Islam, was previously termed un-Islamic by the Ministry of Religious Affairs and Interfaith Harmony.

“There was so much pressure that Human Rights Minister Shireen Mazari had to leave saying that it wasn’t her bill. Even hardliner parliamentarians agree on the issue of forced conversions but argue that it is not that big [an issue]. What is this?” he asked.

All this is being carried out in an environment of impunity. This has to stop and it is up to the state to take urgent and necessary action

“In my 20 years of parliamentary life, I have never experienced this kind of situation. The good image created by the Supreme Court and the prime minister on the rehabilitation of temples has been tarnished.”

Jaipal Chhabria, a Hindu member of Pakistan’s National Commission for Minorities, warned of protests. “We will not sit silently. We will fight against this tyranny. They should have brought a proposal as per Sharia. Don’t use all logic against minorities,” he said.

The rejection has sparked a nationwide outcry. The Lahore-based Cecil and Iris Chaudhry Foundation (CICF) condemned “the sacrificing of the bill at the altar of religiosity”.

In a press statement, CICF president Michelle Chaudhry said underage non-Muslim girls are married off to their abductors who rape and often force them into prostitution.

“All this is being carried out in an environment of impunity. This has to stop and it is up to the state to take urgent and necessary action. The rejection of the bill reflects the political will and intent of the government in regards to safety and protection of non-Muslims in Pakistan,” she stated.

Chaudhry wowed to fight the “grave violation of human rights” at every level. “Forced conversion of non-Muslim minors is a crime and the government of Pakistan must declare it a criminal offense,” she demanded.