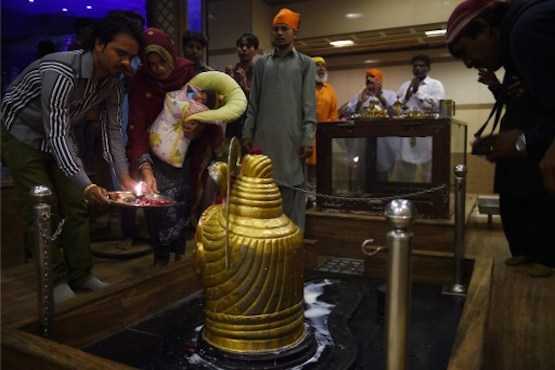 Pakistani Hindus perform a ritual at a temple in Karachi on Nov. 24. Sindh province passed a law making "forced conversions" punishable with a life sentence and forbidding minors from changing their religion, a bid to protect minorities in the conservative Muslim country. (Photo by AFP)

The government of Pakistan's Sindh province has banned people from grabbing Hindu girls and forcing them to convert to Islam, often as a prerequisite for marrying a Muslim man; it is the first province to do so.

The law was passed on Nov. 22 and carries prison sentences of five years to life for anyone found guilty of changing the religion of a minor. Anyone facilitating the crime will be imprisoned or forced to pay compensation to the victim.

"We welcome the historic verdict. It has been very painful for local Hindu families who have no hope of seeing their child after they are abducted. The matter is made worse when the police and courts side with the Muslim party," said Father Abid Habib, former president of the Major Superiors Leadership Conference of Pakistan.

Abductions sometimes feature in cases of forced conversion. The girls are forced to marry a Muslim man after having their religion changed.

Father Habib of Mirpurkhas, a Hindu majority district, has witnessed several cases. "Many families have left the province due to this injustice. The law will only be effective when the justice system remains impartial," he said.

According to the Aurat Foundation that looks out for the rights of women, about 1,000 girls from Christian and Hindu communities are forcibly converted every year.

However, according to Pakistan Hindu Council Patron-in-Chief Ramesh Kumar Vankwani, the numbers are higher as many families do not report cases.

"Several religious parties opposed the law when it was being drafted. Many people cannot understand the rights that Islam guarantees religious minorities," the national assembly member told ucanews.com.

"The practices of the Dark Ages must stop; nobody should have the right to forcibly convert anyone. The international image of our country is at stake. The new law gives hope and protection to other communities as well," he added.

Amarnath Randhawa, president of Hindu Sudhar Sabha, said forced conversion is a regional issue. "Hindu haris [peasants] working for Muslim landlords face this challenge. But things have been better since marriages have been registered," he said.

Despite opposition from hard-liners, the Sindh Assembly passed the Hindu Marriage Bill in February which set the legal age of marriage to 18 years or above. About three percent of girls in Pakistan are married before they turn 15 and 21 percent before age 18, according to UNICEF.