An archbishop in Pakistan's Punjab province has rejected the annual observance of National Minorities Day and helped to lead a boycott of related events on Aug. 11 claiming the charter still mistreats minorities.

"It should be called the Day of Msaawat [equality] instead as we aren't getting our social rights and we need to see the rule of law applied. All of the religious minorities in Pakistan are equal citizens and have contributed both in its creation and to its progress," Archbishop Sebastian Shaw of Lahore told ucanews.com.

Instead of observing the government-supported Minorities Day, the prelate presided over a Diversity Day program organized by the Human Friends Organization on the same day in the Punjab capital.

President Mamnoon Hussain, in office since 2013, addressed a Minorities Day ceremony in Islamabad and called for an end to the "propaganda" about there being fewer opportunities for minorities.

"[This] day gives us an opportunity to acknowledge the services and pay tribute to the people who have contributed immensely to national development and prosperity," he said.

A number of the nation's leaders and senior officials have called for religious freedom and greater equality but many have paid a high price for this.

Shahbaz Bhatti, the Catholic federal minister for minorities, led the campaign to have Aug. 11 declared as Minorities Day in 2009. He was assassinated in March 2011.

Meanwhile, in his first speech to the Constituent Assembly on Aug. 11, 1947, Pakistan's founder Muhammad Ali Jinnah also made a case for greater religious freedom.

"You may belong to any religion or caste or creed — that has nothing to do with the business of the state. Now I think we should keep that in front of us as our ideal and you will find that in the course of time Hindus would cease to be Hindus and Muslims would cease to be Muslims, not in the religious sense, because that is the personal faith of each individual, but in the political sense as citizens of the state." 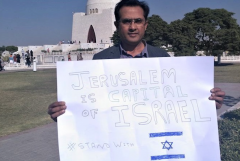 "We are boycotting this day altogether. Increasing religious intolerance and the forced conversion of young women from minority communities have resulted in the migration of minorities to other countries," Francis said.

"The constitution effectively makes us third-grade citizens and bars non-Muslims from becoming president or prime minister."

Other Catholic groups have welcomed the day as a positive move and a sign of the government's continued support for those lower down the social ladder.

The National Commission for Justice and Peace (NCJP), the Catholic Church's human rights body, even teamed up with other Christian NGOs in Lahore on Aug. 11 to screen a documentary called "Why should we celebrate 11th August?"

"Those who participated in our convention deeply appreciated the designation of Aug. 11 as National Minorities' Day," said Peter Jacob, the Catholic director of the Centre for Social Justice.

"Recalling the aspiration of multireligious coexistence reflected in the national flag and the promises made in the Lahore Resolution of 1940, which spells out the need for 'adequate, effective and mandatory safeguards for protection of the rights and interest of minorities,' we emphasize the need for [the] inclusion of minorities in the national mainstream in all tiers of governance and decision making," he said.