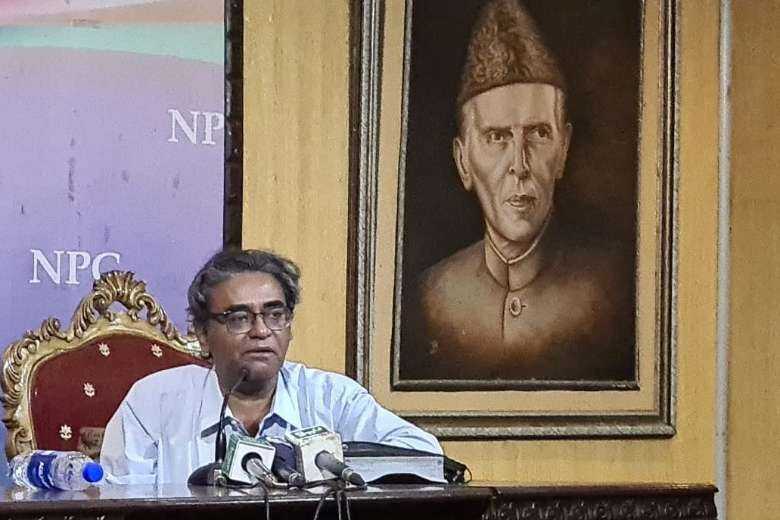 Wajahat Masood, chairman of the Peoples' Commission for Minorities’ Rights, speaks about forced conversion of non-Muslim girls at the National Press Club in Islamabad on Sept. 28. (Photo: Centre for Social Justice)

Pakistan Prime Minister Imran Khan is facing a growing backlash after he assured clerics that his government will not enact any anti-Islamic law.

During his Sept. 27 meeting with Islamic scholars in Karachi, the PM said government bills addressing domestic violence and forced conversions will not be enacted as they have provisions which are “in direct conflict with the teachings of Islam.”

He requested the clerics keep him informed of any such act so that he could intervene in time and ensure that no policy or law which conflicts with Islam is made during his tenure.

Church leaders and rights groups including the Cecil and Iris Chaudhry Foundation, a Lahore-based Catholic NGO, released a statement on Sept. 29 demanding justice for minority women.

“So it is OK for women to be battered and tortured, and it is also OK for underage non-Muslim girls to be forcefully converted to Islam? The prime minister needs to realize that all are not Muslims in Pakistan. The state must protect the rights of religious minorities; effective legislation against forced conversions is pivotal. No two ways about it,” it stated in a Facebook post.

“Clearly he is trying to save his Islamic vote bank. Nobody is demanding a law against Islam; our struggle is against pedophiles using religion as their shelter for criminal activities. Exploitation of vulnerable minorities shouldn’t be equated with opposition to Islam,” he told UCA News.

Addressing a Sept. 28 press conference in Islamabad, the Peoples' Commission for Minorities’ Rights and Centre for Social Justice (CSJ) expressed utter dismay at the reduction in religious freedom relating to child marriages and forced conversions.

According to the CSJ, the highest incidents of forced conversions (52 percent) were reported in Punjab, followed by 44 percent in Sindh.

Participants in the press conference demanded that the Ministry for Religious Affairs should stand up and be counted for protection of minorities or it will go down in history as one abetting the worst crimes against minorities.

“Every individual or group is at liberty to convert or reconvert another by argument or persuasion, but no individual or group should attempt to do so or prevent its being done by force, fraud or other unfair means. Persons under 18 years of age should not be converted unless it be along with their parents or guardians,” said CSJ director Peter Jacob.