Shane Chaudhry, Executive Director of Catholic bishops' justice and peace commission, middle, with Christian and Hindu leaders at a press conference for the release of the study — Family/Personal Laws for the Religious Minorities in Pakistan — in Lahore. (Photo by Kamran Chaudhry)

While some Christian leaders in Pakistan express support for recasting a century-old Christian divorce act, others say a consensus must be first found on how to effectively deal with the issue.

The subject of divorce attracted media attention again after Retired Bishop Alexander John Malik supported a petition that challenges the country's Christian Divorce Act of 1869, which limits divorce to adultery.

Section 10 of the act states that in order to divorce a Christian woman, the husband can only use the charge of adultery against her and then prove it before divorcing her.

Amin Masih, a Christian from Lahore, filed the petition against the act. His lawyer said Masih divorced his wife but the dissolution of their marriage was devoid of legal recognition since he had no reservations regarding his wife's character.

"They simply did not want to remain together," the lawyer said.

"The law in the Bible relating to divorce is forever. But it is not a sin to change human laws. A couple deserves a way out of tension if they cannot co-exist," said the Reverend Khokhar who is the Church of Pakistan District superintendent of Lahore. "It is not fair to impose the allegation of adultery on a wife just to seek divorce," he said.

The government has been seeking church views on the controversial bill and held several meetings in the past but failed to reach a conclusion. In 2012, Ministry of National Harmony drafted a Christian Marriage and Divorce amendment bill after consultation with Christian ministers, 10 bishops (four of them Catholics) and four priests. However, the bill remains pending in the National Assembly because of reservations from some Catholic Church circles.

"We need a team of legal experts and canonists to deal with this delicate issue. The church must decide it as a body," Father John William from Peshawar told ucanews.com.

Father William added he has sought the opinions of other priests when dealing with divorce cases during his 39 years of priesthood. "It is hard to prove that a partner is involved in adultery. The whole context must be considered. Impotency is also a factor in Christian divorce," he said. 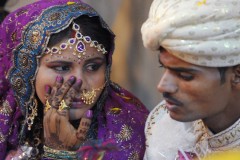 Cecil Shane Chaudhry, executive director of the Catholic bishop's justice and peace commission noted that the laws haven't been amended since their inception in 1869.

"Thus they are not entirely applicable to the needs of modern times," said Chaudhry.

A commission study — Family/Personal Laws for the Religious Minorities in Pakistan — states that restrictive marriage laws can lead to Pakistani Christians considering religious conversion as a way out.

Citing canon laws, the study proposes that any party can be given rights to present a petition of the dissolution of marriage or divorce with a logical reason such as domestic violence, sexual violence, mental or terminal physical illness and intentionally not fulfilling any financial, emotion or physical obligations.