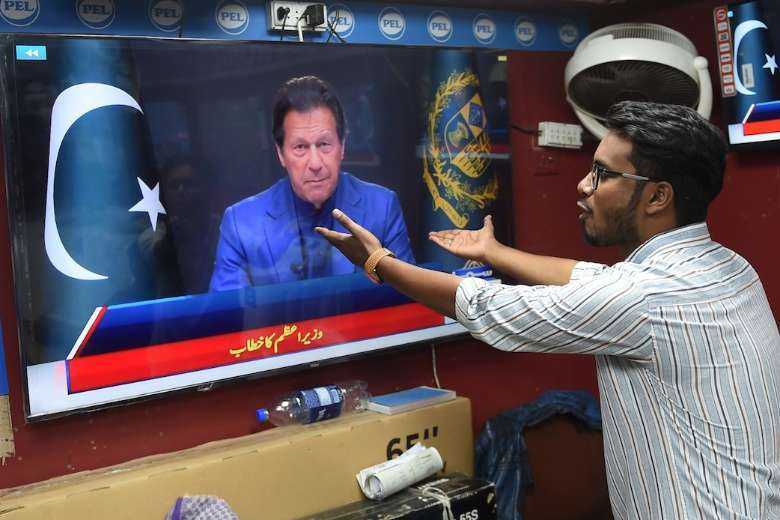 A man gestures as he listen to Pakistan's Prime Minister Imran Khan addressing the nation on television at a market in Karachi on Feb. 28. (Photo: AFP)

The political temperature in Pakistan has been soaring this summer since opposition parties moved a no-confidence motion on March 8 seeking the ouster of Prime Minister Imran Khan.

Under the constitution, the prime minister ceases to hold office if the majority of members of the National Assembly vote for a motion of no confidence. The government has announced that this vote will be held on March 28.

The premier is being accused of poor governance, failing foreign policy and mismanaging the economy. The former cricketer took the attack mode by threatening opposition leaders, accusing media of corruption, humiliating defectors from his Pakistan Tehreek-i-Insaf (PTI) party and announcing a million-strong march on voting day in Islamabad.

The rally has been named Amar Bil Maroof, the Islamic concept of advocating virtue, to attract religion-fueled factions. Since taking power in 2018, Khan has touted the fancy concept of turning Pakistan into Riyasat-e-Madina, the Islamic version of a welfare state.

Earlier this month, Khan inaugurated another Islamic body, the National Rehmatul-lil-Alameen Authority, with a mandate to research the life and teachings of the Prophet Muhammad and to supervise the education system.

"Pakistan’s democratic institutions are facing a new threat. The situation risks spiraling into a dangerous confrontation"

Islamabad is hosting the 48th conference of the Organisation of Islamic Cooperation on March 22-23. Ironically, an event aimed at highlighting the unity of the Muslim ummah comes at a time when the polarization of society is at its peak.

On March 10, police in capital Islamabad stormed parliamentarians’ apartments and detained two opposition MPs along with several other opposition activists. Police alleged that volunteers from the opposition Jamiat-Ulema-e-Islam had entered the apartments without permission. All were released within hours.

Shahbaz Gill, a special assistant to the prime minister, said that photographs of “traitors” would be displayed in cities so that people could identify them. He verbally abused a Hindu National Assembly member, also a PTI dissident, on a live television show on March 17.

On March 18, angry supporters of the ruling party entered the Sindh House in Islamabad where dissident lawmakers had sought refuge after breaking the side gate during a protest. They were also released the next day.

Fearing violence, Human Rights Watch (HRW) urged the government and opposition to “deter supporters from violence” amid the threat of political turmoil.

“Pakistan’s democratic institutions are facing a new threat. The situation risks spiraling into a dangerous confrontation. The government has a responsibility to uphold the constitution and allow for voting without threats or violence on the no-confidence motion,” HRW said in a March 16 statement.

“Both the government and opposition should send a strong message to their supporters not to subvert the democratic process or sway the vote through intimidation or other criminal acts. Parliamentary voting is a core democratic principle and attempts to obstruct it risk further undermining an institution vital to representative government and the rule of law.”

“Like other citizens, we are concerned about political instability in our country where people are already suffering due to rising inflation, livelihood issues and a lack of development programs"

In a statement issued last week, the Pakistan Catholic Bishops’ Conference (PCBC) called for political dialogue and urged both the government and opposition to restrain from confrontation and ease the tense political atmosphere.

PCBC president Archbishop Joseph Arshad of Islamabad-Rawalpindi said the bishops are worried about the political situation due to the plight of the common man.

“Like other citizens, we are concerned about political instability in our country where people are already suffering due to rising inflation, livelihood issues and a lack of development programs. We urge all parties to find a peaceful solution,” he told UCA News.

The economic outlook is disturbing. Pakistan ranks 92nd out of 116 countries with a score of 24.7, which indicates a serious level of hunger, according to the 2021 Global Hunger Index. Except India, its ranking is lower than all other countries of South Asia and other neighboring countries.

Besides demand and supply, the ongoing sentiments are driving the movement of the local currency that dropped to a new all-time low of 181.35 rupees against the US dollar in the interbank market. Pakistan’s consumer price index rose 13 percent in January from a year earlier, the Bureau of Statistics said last month, the highest in two years.

No Pakistani prime minister has ever completed his term in office. But it’s hard to root for a premier hiding behind the religion card. For decades, we have seen how this Ace of Spades has been used to submit any entity and strengthen authoritarian regimes.

Political rivalries will turn into open conflict if Khan loses. Winning the vote of confidence will further fuel the moral policing. Pakistan is passing through a transition and the countdown has already begun. May peace and sanity prevail over the pandemic of exploitation in the name of religion.

In the words of rights activist Jibran Nasir: “Stand with development, tolerance and rule of law. Pakistan is a country of 220 million people. Don't reduce its survival to survival of any one individual. PMs should come and go based on performance, only cult worship ignores the cost. This country and its welfare cannot be ignored.”