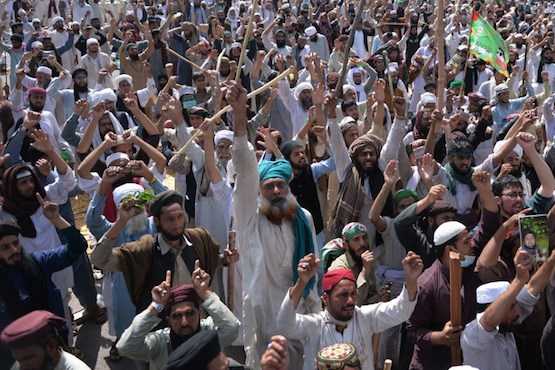 Pakistani supporters of executed murderer Mumtaz Qadri protest in front of the parliament building in Islamabad on March 30. Islamist hard-liners, angry at the execution of Qadri, are calling for the death of Asia Bibi, a Christian women sentenced to die for violating Pakistan's blasphemy law. (Photo by AFP)

Islamist hard-liners angry at the execution last month of the assassin of Punjab Gov. Salmaan Taseer have stepped up calls for Asia Bibi, a Catholic woman sentenced to die for blasphemy, to be put to death.

Hundreds of supporters of the Islamist group Pakistan Sunni Tehreek staged rallies across Pakistan on April 16 calling for Bibi's execution and the deaths of other blasphemers.

The rallies in Karachi, Rawalpindi, Lahore and other cities were organized by Sunni Tehreek head, Sarwat Ijaz Qadri, as part of the group's response to the execution of Mumtaz Qadri.

Qadri, Taseer's bodyguard, shot the former governor for speaking out against the country's controversial blasphemy laws.

Bibi, a Catholic mother of five, was convicted of blasphemy and sentenced to death after being accused of insulting the Prophet Muhammad by a group of Muslim women who were angry Bibi drank from the same water container as them.

If executed, Bibi would become the first woman in Pakistan to be executed for blasphemy. Pakistan's Supreme Court is due to hear an appeal by Bibi against her sentence.

"We will protect the sanctity of Holy Prophet at every cost and will not sit idle if Asia Bibi Masih is freed," Pakistan Sunni Tehreek said in a statement read out at all rally sites.

"The whole nation will take to the streets … if any blasphemer was sent abroad," the group warned.

If Bibi wins her appeal it is expected she will be forced to go into exile.

"A conspiracy is being hatched. ... We will not let it happen. The rulers have begun a war with religious forces by hanging Mumtaz Qadri," the statement concluded.