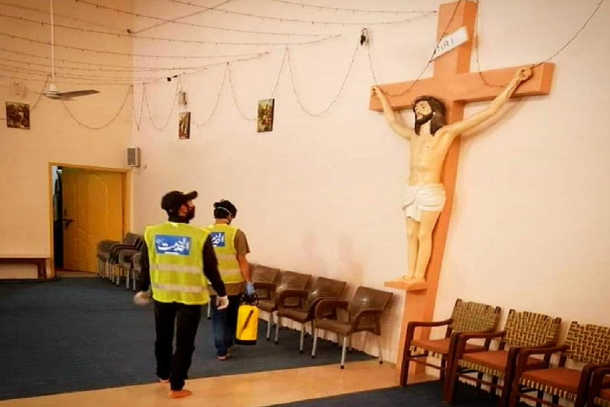 Workers from the Al-Khidmat Foundation, the charitable arm of Jamaat-e-Islami, spray the interior of a Karachi church with disinfectant as a precaution against the coronavirus. (Photo: Jamaat-e-Islami media)

Pakistan’s largest politico-religious group, Jamaat-e-Islami, known for its hardline views, has drawn praise after its workers were pictured sanitizing the worship places of minorities.

Workers of Al-Khidmat Foundation, the charitable arm of the group, visited Christian churches, Hindu temples and Sikh gurdwaras in various cities of Pakistan and sprayed them with chemical disinfectants.

The move came after leader Siraj ul Haq issued a video message directing his party’s volunteers and youth activists to look after minorities, transgender persons and sweepers badly affected by the ongoing lockdown.

“The transgenders are already faced with isolation. Sweepers are the most neglected section of our society and non-Muslim minorities, whom I consider as equal citizens of Pakistan, are in a difficult situation. Our volunteers should look after them,” Haq said.

“I salute my volunteers who carried out disinfectant spraying in a church in Karachi. The whole nation is suffering from the coronavirus and it is important to serve humanity indiscriminately.”

His gesture was applauded by minority leaders, rights campaigners and transgender activists.

Father Anthony Ibrass, parish priest of St. Thomas Parish in Malir, Karachi, said the world is going through a pandemic.

“Jamaat-e-Islami is taking the lead by setting a good example with its gesture of care and love for each other. They didn’t consider the boundaries of religion or of anything but are serving humanity. We hope this will carry on in years to come,” he said.

Bindiya Rana, a transgender activist and founder of the Gender Interactive Alliance, commended the group for its positive message amid the pandemic. “Such an initiative from the head of a major religious party will help change mindsets and clear up misconceptions about our community,” Rana said.

Ravi Dass Vaghela, another Hindu rights activist, noted that this example sends out a very positive message. “The Hindu community really appreciates this gesture and believes in unity at this hour of crisis and suffering,” he said.

The number of people infected by the coronavirus in Pakistan as of April 1 had risen to 1,938 with 26 deaths.