Pope Francis arrives at St. Peter's square for his Jubilee audience on Jan. 30. The pope will visit Asia in March but will not be visiting Pakistan. (Photo by AFP)

Church officials say the Pakistani government's proposal to invite Pope Francis to visit is "unrealistic" given the current security situation in the country.

The officials were responding to news of a Pakistani government delegation — led by a Catholic minister Kamran Michael — who stated they will be inviting the pope to visit the country during his trip to Asia next month.

Michael told the media that the delegation hoped to tell the pope about the "sacrifices" that Pakistan has made in fighting terrorism.

He said that Pakistan is a "peace-loving nation" and that should be internationally acknowledged.

"The visit of Pope Francis to Pakistan is likely in this year," Michael added.

"The circumstances are not conducive given the prevalent wave of terrorism," said Father Daniel.

"The leaders have to change their thinking first and bring order," Father Daniel added.

Pakistan faces security threats from a number of militant Islamic networks. Just last month, Taliban militants killed 21 people at a university in the north of the country. The same group massacred 150 people, 132 of them children at a Peshawar school in 2014.

Father Francis Gulzar, vicar general of Lahore Archdiocese said it takes years of preparation for the pope to visit any country. 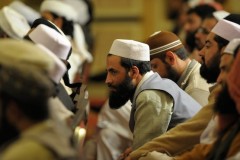 The Pakistani government is also "trying to show that they care for religious minorities and we all know that the situation is quite the opposite," Father Gulzar told ucanews.

Saeeda Deep, founder of the Institute of Peace and Secular Studies, agreed that the invite looked like an attempt to improve Pakistan's image abroad.

"Perhaps they are trying to show that we are not conservative Muslims and welcome other religious icons," said Deep.

"A visit by the pope would definitely strengthen local Christians who are often persecuted and discriminated against for their faith but in order to make this happen, the state must make some radical changes and reforms," she said.

Pope John Paul II, who celebrated a Mass at National Stadium in Karachi during a three-hour stopover on Feb. 16, 1981, has been the only pope to visit Pakistan. A small bomb exploded outside the stadium minutes before his arrival.