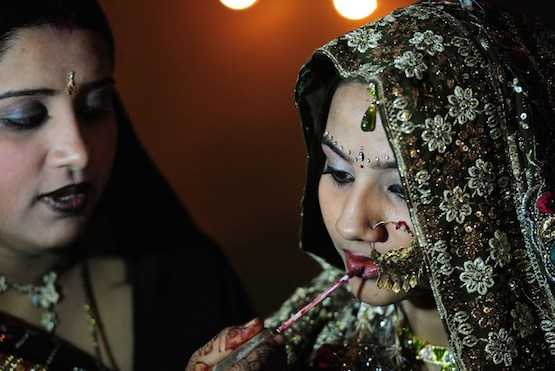 A Pakistani Hindu bride gets final touches from a relative at a mass-wedding ceremony in Karachi in this 2015 file photo. A parliamentary body has approved a new marriage bill for Hindus that if passed will be the first marriage law for the country's largest religious minority. (Photo by AFP)

A Pakistan parliamentary body has approved a long-awaited Hindu marriage bill amid objections from minority lawmakers about a late amendment, they say encourages forced conversions.

Unlike other religions in Pakistan, there has been no marriage law for Pakistan's largest minority community since the creation of country in 1947, creating a multitude of issues, including registration of marriages, obtaining national identity cards, visas and other issues such as transfer of property.

Under the new bill, the minimum age for a Hindu couple to marry is 18 years of age and the couple cannot be related by blood.

While there was consensus on most of the recommendations, an amendment in which a marriage will be legal if any one of the Hindu couple decides to convert to another religion, has sparked controversy.

All three Hindu members of the parliamentary committee opposed this clause, saying it would encourage forced conversions.

"We strongly objected to this clause, but they were overruled by the majority Muslim members of the committee," Ramed Kumar, head of the Pakistan Hindu Council, and a ruling party lawmaker, told ucanews.com.

"We tried to persuade the committee that conversion shouldn't be allowed before seeking termination of a marriage from a court of law," Kumar said.

"It is unfortunate that this very crucial point was overlooked by the committee," he said.

"We were advised by the committee to introduce another bill on the issue of forced conversions," he said.

Amarnath Motumal, a senior figure in the Hindu Panchayat and Human Rights Commission of Pakistan, welcomed the bill.

However, he too criticized the clause of conversion.

"It is like legalizing an offense," he said. "It will be a great injustice if the sensitive issue of conversion is legalized through Hindu family laws," he said.

A couple must seek termination of their marriage in a court of law before converting to another religion,

He called on lawmakers to strike down the clause when the bill goes to the National Assembly.

Hindus have long complained about the abduction of Hindu girls and their forced conversions and marriages.