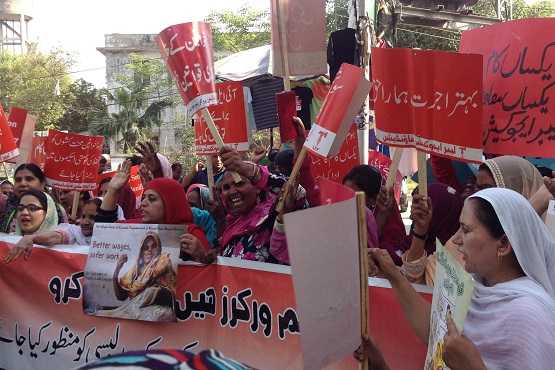 Female domestic workers took to the streets of the Pakistan city of Lahore on April 28, in a rally to mark Labor Day and to demand the government give them workers' rights enshrined in law.

At least 150 workers and activists, marched on the Lahore Press Club holding signs that read "better wages our right" and "we are laborers," blocking traffic for more than an hour.

Christian human rights activists say Christian girls from poor families often become victims of sexual harassment and assault. One case made international headlines in 2010, after Catholic bishops protested against the killing of a 12-year-old Christian girl allegedly by her employer, a rich Muslim lawyer in Lahore.

In the absence of legal protection Caritas Pakistan has been organizing awareness sessions among unskilled working women under its livelihood program.

"These women are not entitled to insurance and similar perks like factory workers or government employees. They usually work in 5 or 6 houses every day," said Father Joseph Louis, former executive secretary of Caritas Pakistan Lahore who supported the protesters' calls.

"Skills training programs on things such as candle making, cooking, needle work, hairdressing for beauticians are being offered in different dioceses to engage young women in entrepreneurship and make them independent," Father Joseph said.

Punjab province was the first province in Pakistan to formulate a national policy to give domestic workers rights in March 2013. It recognizes them as legitimate employees and includes strategies, plans and programs for their protection. However the finalized draft is still awaiting approval of by the provincial cabinet.

Farzana Mukhtar of the Labor Education Foundation, one of the organizers of the rally, condemned the delay in passing legislation that would guarantee maids their rights.

"More than 10 million domestic workers across the country have waited to be included in a labor rights law for years. These women are ignored. Their children have a right to education and they deserve access to health and education schemes,” she said.

Last year, the federal government raised the minimum wage from 12,000 rupees (US$ 114) to 13,000 per month for unskilled workers. Domestic workers were not included.

Domestic workers' wages are usually negotiated based on the type of work they do such as dish washing, cooking, cleaning, dusting, washing clothes or ironing.

Many such maids are exploited by middlemen who take large commissions or deprive them of their wages, the activist said.