Interfaith groups in Pakistan dedicated the International Day of Peace on Sept. 21 to Rohingya refugees who fled violence in Myanmar’s western Rakhine state.

Archbishop Sebastian Shaw of Lahore chaired an inter-religious seminar in Lahore at the Dominican Peace Centre where prayers, speeches, poetry, songs and candles vigil were held for the Muslim minority, at least 420,000 of whom have fled to neighboring Bangladesh.

United Religions Initiative Pakistan, the main organizers, showed a documentary which contained graphic images of the persecution being meted out against the Rohingya, community who are widely reviled as "Bengali" immigrants in Myanmar.

Watch this ucanews.com video on the interfaith prayer service.

The event was one of several organized by religious minorities around the country to show solidarity with Rohingya Muslims. Members of both Sikh and Christian communities joined Muslim protesters in different cities to condemn the persecution. Earlier this month, the minority wings of Pakistan Muslim league party held a similar press conference in Lahore press club.

Many of those attending the seminar condemned Nobel Peace Prize laureate and Myanmar’s de facto leader, Aung San Suu Kyi, for not doing enough to help the Rohingya.

In her first major speech about the worsening crisis on Sept 19, Suu Kyi said the conflict was just one of many problems ailing Myanmar. 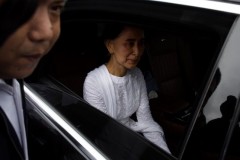 In defense of the tragic, impotent silence of Aung San Suu Kyi "It was a cold calculated speech. She seems to be ignoring the reports issued by UN and numerous rights groups, which detail the causes behind the inter-ethnic bloodshed. She did not offer any solution."