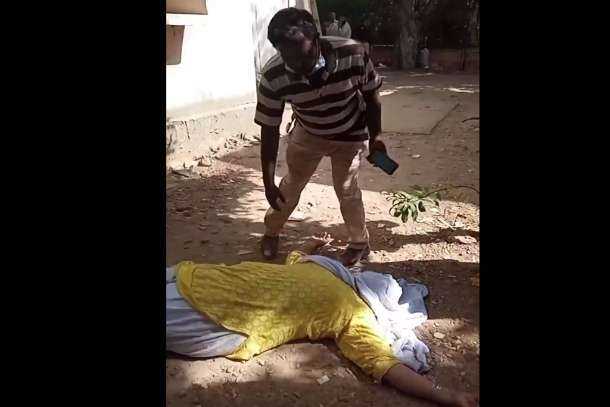 Rita Masih cried for her daughter with open hands pleading outside a courthouse in Karachi.

“Arzoo, come to your mama. He will kill you. My daughter is sitting in the front,” she cried before fainting to the ground. Her relatives placed her on a marble bench under a tree and poured water in her mouth. “This is blind law. The drug addict will sell her,” said her husband.

Pastor Ghazala Shafique filmed the protest at the High Court of Sindh province on Facebook Live on Oct. 27 as the family pleaded with police and rangers to meet the sixth grader. The video was viewed by more than 3,000 people within a few hours.

In a major setback to church groups, the court validated the marriage of the Catholic minor to her Muslim abductor. Meeting her mother later in the court, Arzoo Raja confessed that she had recited Kalma, the Islamic proclamation of faith. She was escorted with the Muslim family under police custody. Her next hearing is on Nov. 11.

Arzoo was kidnapped while playing in a street in front of her home on Oct. 13. However, on Oct. 15, the police summoned the family to the station where they were given marriage papers which claimed she was 18 and had willingly converted to Islam after marrying 44-year-old Ali Azhar. According to church and government documents, Arzoo is 13.

“The petitioner initially belonged to the Christian religion. However, after the passage of time, the petitioner understood and realized that Islam is a universal religion and she asked her parents and other family members to embrace Islam but they flatly refused,” stated the court order.

“Subsequently she accepted the religion of Islam before the religious person of Madressah Jamia Islamia. After embracing Islam, her new name is Arzoo Faatima; per learned counsel petitioner contracted her marriage to Azhar of her own free will and accord without duress and fear.

“After registration of FIR [first information report] police started harassing the petitioner. They are unable to pass a happy life. The SHO [station house officer] … is directed to provide protection to the newly wedded wife.“

Protests have been held in Karachi and Lahore against forced conversions since the case was highlighted on social media.

“I am distressed and disappointed with the position taken by the honorable court. A sexual act with a minor is felony even if she is willing. The court has validated a rape despite the Sindh Child Marriage Restraint Act 2014 that punishes contractors of child marriage with up to three years' imprisonment,” he said.

“Can a judge, an army officer or a Pakistani politician tolerate handing over their minor daughter to a middle-aged man. What is the future of minority girls in Pakistan? Our courts favor the powerful. We still don’t have strong calls from a joint minority platform on forced conversions.”

Last October, Huma Younus, a grade eight student, was abducted from her Karachi home by a Muslim man named Abdul Jabbar and his two accomplices. In April, 14-year-old Maira Shahbaz was abducted at gunpoint and forced to marry a Muslim resident of Faisalabad district in Punjab.

According to the Aid to the Church in Need United Kingdom (ACNUK) website, “Maira and her family are in hiding from extremists who accuse her of apostasy and want her dead. The family are in immediate danger.”

Meanwhile, Cardinal Joseph Coutts of Karachi has called for Christian activists to hold another protest on Oct. 28.

“#JusticeforArzoo protest at St. Patrick's Cathedral, Karachi. We condemn the publications of blasphemous content in France. Our sympathies are with the families of the victims of Peshawar bomb blast,” said the announcement by White Pakistan, an interdenominational community.

Sabir Michael, a lay Dominican, called it a poor response.

“The comfort of the cathedral could have been sacrificed to reach the press club and address the media. The addition of condemnation of blasphemous caricatures and terrorism will divert focus away from forced conversions,” he told UCA News.

“The pattern in the high court is a replica of what we have seen in the past. The production order by the session court was simply bypassed. The parents of Arzoo even touched the feet of police to meet their daughter. We never witnessed such helplessness. My heart was broken today.”

“Arzoo ran to her mother but the Muslim snatched her and took inside the courtroom. The staff even snatched my phone. Azhar had grasped the hand of Arzoo. Police claimed to have her in custody but the court orders were the opposite. The court staff, police and judges are united in defending the marriage,” she said.

“I will leave Pakistan and live in a country where our daughters and families are safe and the authorities speak the truth. Is this service of faith? The judiciary should make ossification tests mandatory in interfaith marriages. We demand security.”