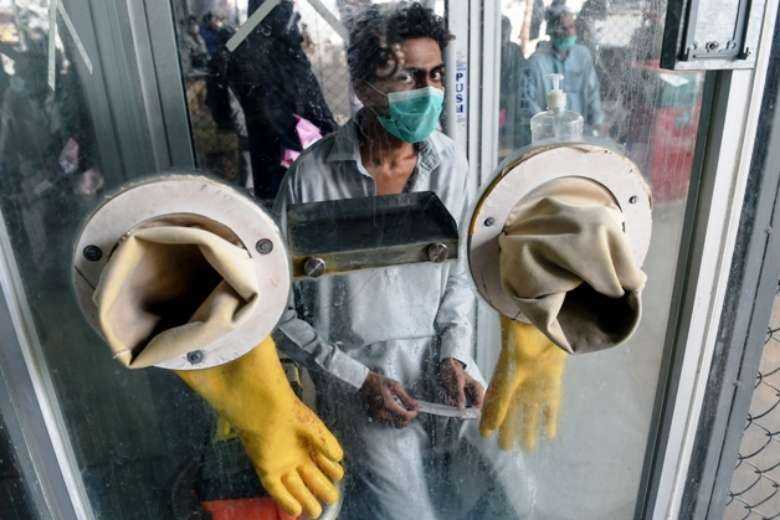 A Pakistani man waits for a health worker to take a swab sample to test for the coronavirus at a testing point in Karachi on July 23, 2020. (Photo: AFP)

Educationists and activists in Pakistan have hailed the nation’s apex court for questioning a student’s plea seeking extra marks for memorizing the Quran while seeking admission to a medical course.

“Why should a Hafiz-e-Quran [a person who memorizes the Quran] be given extra marks for university admissions?” asked Justice Qazi Faez Isa while hearing a petition filed by a student after being denied admission to the Bolan University of Medical and Health Sciences in Quetta.

“We believe that memorizing the Quran is sacred. And it is a plus point when someone wants to become the imam of a mosque or a religious lecturer. But how can a Hafiz-e-Quran be a better doctor?” he added.

The Supreme Court on Jan. 10 also issued notices to the Pakistan Medical Commission and others to submit replies to a query as to why additional marks should be given for memorizing the Quran while admitting someone to medical colleges and universities.

The government of Pakistan during the regime of General Zia-ul-Huq in 1987 had passed a law that Hafiz-e-Quran candidates would be graced with 20 extra marks at every level after matriculation.

The student petitioner cited the law to plead before the court that if given 20 additional marks for memorizing the Quran, he could be easily enrolled for a medical course.

We don’t object to extra marks if minority candidates are awarded an equal advantage. The verdict sends a clear message. Article 25 of the constitution guarantees equal citizenship

Church leaders as well as representatives of other minority communities, who have often complained about this discriminatory practice, welcomed the apex court judge’s remarks as “a key step to empowering religious minorities in Pakistan.”

They have over the years pointed out how non-Muslim students lose out to their majority counterparts when seeking admissions to professional courses or jobs with the Public Service Commission due to the provision for granting 20 extra marks for memorizing the Quran.

The Catholic bshops' National Commission for Justice and Peace (NCJP) has been lobbying against the policy for more than a decade. In 2006, it even filed a case when a Christian student was denied admission to a medical college despite achieving the required marks.

“The officials of the health department didn’t even appear for the court hearings. The student was later accommodated in a dental college,” Ata-ur-Rehman Saman, coordinator of the NCJP, told UCA News.

Sabir Michael, a Catholic professor at the University of Karachi, welcomed the verdict. “It’s a good step. We always demanded fair play,” he said.

“We don’t object to extra marks if minority candidates are awarded an equal advantage. The verdict sends a clear message. Article 25 of the constitution guarantees equal citizenship," he told UCA News while regretting that many generations had lost the opportunity as authorities kept violating the constitution.

Interestingly, Muslim convicts in Pakistan’s Punjab province can seek remission in their prison terms of six months to two years by memorizing the Quran.

Punjab also became the first province to set a quota for students from religious minorities in its higher education institutes in May 2020.