A Pakistani court has directed the Punjab provincial government and police to give the father of death row convict Asia Bibi prison visitation rights, a family lawyer says.

The directive comes two days after Soran Masih filed a petition in the Lahore High Court demanding access to his daughter.

Masih said authorities had repeatedly blocked him from the prison following Bibi’s conviction for blasphemy in 2012.

"We are thankful to the high court for a swift action on our petition," Gill said.

He said Masih and other close family members could now visit Bibi when they want.

She is being held in the central Pakistani city of Multan, some 290 kilometers from Lahore, the provincial capital of Punjab province.

Bibi, a Roman Catholic and mother of five, was sentenced to death in 2010 for insulting the Prophet Mohammad, a charge she denies. Bibi says she was targeted after drinking water from a vessel used by Muslim farmworkers.

The workers said it was forbidden for a Christian to drink water from the same container and later reported her for blasphemy, saying she had insulted the Prophet Mohammad.

Her appeal against the death sentence is currently pending in the Supreme Court. 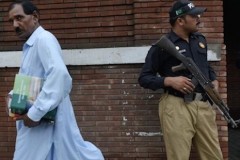