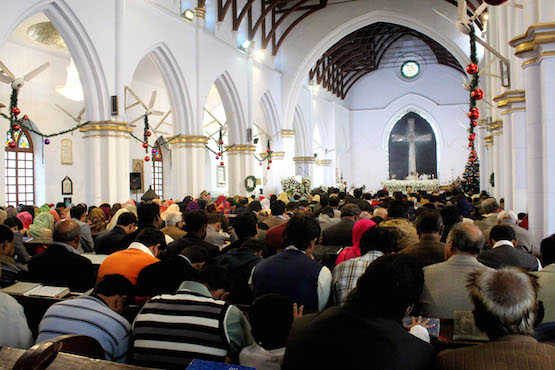 Pakistani Christians attend a Christmas Mass in Peshawar, northwestern Pakistan, on Dec. 25, 2016. Christians are often the target of violence in this Muslim-majority country. (Photo: IANS)

An anti-terrorism court in Pakistan acquitted 106 Muslims accused of being involved in a 2013 arson attack on Christian houses in Lahore’s Joseph Colony neighbourhood.

On March 9, 2013, thousands of protesters armed with sticks and stones stormed Joseph Colony and set about 150 houses ablaze over allegations of blasphemy against a Christian man.

Hundreds of homes, shops, vehicles and three churches were torched by the mob.

There were no casualties as Christians, fearing for their safety, had already fled the colony after being alerted by police about possible mob violence.

The authorities were strongly condemned for letting the mob attack the Christian colony despite knowing their intentions in advance.

Police later launched a crackdown on the rioters, arresting over 100 people. The Christian man accused of blasphemy was also arrested.

The acquittal was announced due to lack of evidence as prosecution witnesses refused to recognise the suspects, local media reported. They also said they had no objection if the accused were acquitted in the case.

Meanwhile, church leaders from Lahore Archdiocese have expressed their disappointment at the acquittal of all suspects.

"This is quiet upsetting. Basically, this means that, despite video footage, documents and pictures of thousands rampaging through Christian properties, the court has not found anyone guilty. So mobs are free to do whatever they want," Cecil Shane Chaudhry, executive director of the Catholic bishop's justice and peace commission told ucanews.com.

"Perhaps the police are not properly doing their job and rounding up the right people. Also, there is community-based pressure on the lower courts. If there was no substantial evidence, the court should also accept the bail of Sawan Masih [the Christian suspected of blasphemy]."

Rawadari Tehreek ("movement for tolerance" in English), an interfaith organization, plans to discuss the fallout from the verdict in a Jan. 30 meeting in Lahore.

"We are worried. Once again history has repeated itself and we are denied justice. None of the culprits in anti-Christian attacks have been apprehended in the past. While this gives a negative message to persecuted religious minorities, it also encourages extremists," said Samson Salamat, chairman of the organization.

"Perhaps the church leadership should be more active in pursuing the court proceedings in such cases. Those who are directly affected usually settle their financial loses via back-channel diplomacy which means there are no witnesses."

Christians are the most persecuted religious minority in Pakistan. In recent years, Christians braced continuous deadly attacks in the country leaving hundreds of them dead.