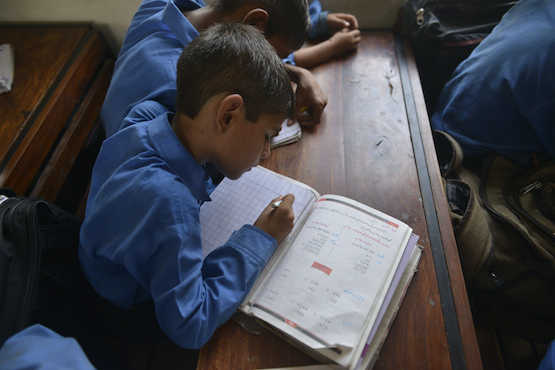 Pakistani students attend a class at a school on International Literacy Day in Lahore in this Sept. 8, 2016 file photo. A Grade 12 student in the northwestern Pakistan town of Charsadda has been arrested for killing the principal of the town's New Islamia Public College. (Photo by Arif Ali/AFP)

A college principal was killed by a Grade 12 student who had accused him of blasphemy in Pakistan's northwest region.

Sareer Ahmed, principal of New Islamia Public College in Charsadda, was shot dead on Jan. 22 by Faheem Ashraf after they had argued over the student being marked absent for skipping classes to attend a protest sit-in in Islamabad by Islamist parties last November.

The assailant accused the principal of blasphemy as an excuse for the shooting, according to investigators.

Zahoor Afridi, a district police officer, told media that no evidence was found to suggest that the slain principal had committed any blasphemy.

"This killing is yet another shameful reminder of how easy it still is to manipulate the existing blasphemy laws to avenge personal grievances," a statement by the Human Rights Commission of Pakistan (HRCP) said.

Last year, Mashal Khan's murder by a mob at Abdul Wali Khan University in Mardan led to countrywide outrage and calls for the blasphemy law to be modified.

Khan had been accused of blasphemy over social media, although an investigation found Khan to be innocent.

"It is regrettable that no lessons are being learned from these incidents and no action is being taken at all by authorities to prevent such episodes," HRCP said.

"This incident is further confirmation of the slide toward extreme intolerance in societies on the one hand and, on the other hand, the apathy and inability of the authorities to meet the challenges of extremism."

Blasphemy remains a highly sensitive issue in Pakistan and allegations do not need to be proven before provoking murder.