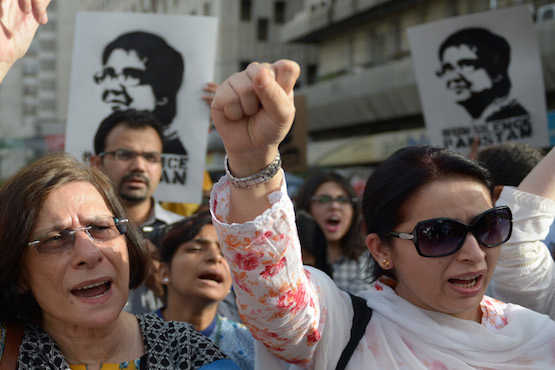 Pakistani civil society activists shout slogans as they hold images of an assassinated rights campaigner during a protest in Karachi, in this file photo. (Photo by AFP)

When Saeeda Deep interviewed a former Jihadi teen turned professor, she thought his story would inspire the whole nation.

But she was wrong.

Official permission was not granted for her to show the resulting documentary in Pakistan government-run schools.

Deep is the founder of the Institute of Peace and Secular Studies in the Muslim-majority nation.

National as well as international NGOs have been complaining about arbitrary restrictions.

NGOs were adversely affected by the 2012 passage of the Regulation of Foreign Contribution Act, which was purportedly aimed at cutting funding to terrorists.

Security restrictions intensified under an anti-terrorism National Action Plan following the 2014 massacre of more than 130 school children by Taliban militants in Peshawar city in the Northern Province.

Media reports indicate that authorities in Punjab Province, bordering India, have revoked the registrations of 3,773 NGOs out of a total of 8,529.

"We are seen as foreign agents and traitors," Deep, herself a Muslim, said.

This included allegations of links between various NGOs and Indian intelligence operations.

"The state despises us for raising issues like human rights and democracy, which they try to hide," she said.

Cutting off sources of funding for terrorist organizations has been a key element of heightened security measures.

However, challenges increased for human rights groups as mosques, madrassa Islamic religious schools and NGOs are all registered under the Societies Registration Act.

Church venues are increasingly providing an outlet for NGO activities.

"The church has always been supportive of peace initiatives," Deep said.

For the past few months, Deep has been showing her documentary in missionary schools.

Similarly guests are being invited for Diwali celebrations at a Catholic institution.

However, government and commercial premises refused to act as venues for Diwali festivities.

The Human Rights Commission of Pakistan referred to "demonization" of NGOs last year in its annual report.

Many activist bloggers have gone missing or fled the country in fear of their lives after being accused of offenses such as blasphemy.

The Human Rights’ Commission says 728 Pakistanis were added to a list of missing persons in 2016 - the highest number in at least six years.

There have been media reports that nearly 1000 bodies of political activists and suspected armed separatists were found in arid Balochistan province, bordering Afghanistan and Iran, during the past six years.

For example, organizations unable to provide detailed information about all their employees would have their licenses revoked.

"The scrutiny should have been across the board," Chaudhry said.

Many sectarian "hate" groups were not being subjected to the same level of scrutiny, he added.