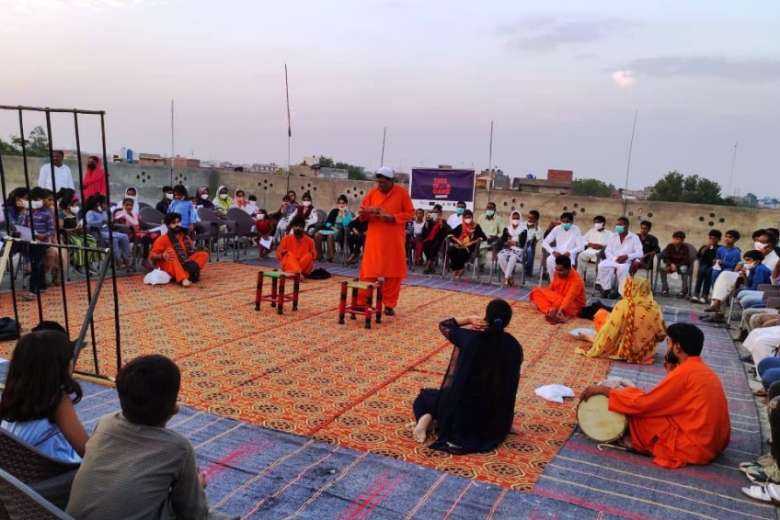 A street play highlighting the plight of the families of death row prisoners is performed at the Saviour's Church in Lahore, Pakistan, on Oct. 3. (Photo supplied)

The Saviour’s Church in Lahore played host to a street play highlighting the plight of families of death row prisoners, kick-starting the awareness campaign for the World Day Against the Death Penalty observed every Oct. 10.

The performance on Oct. 3 marked the launch of an interactive campaign by Justice Project Pakistan (JPP) titled "This Is (Not) A Game," which is in line with this year’s theme "Women and Death Penalty: Invisible Realities" dedicated to women who risk being sentenced to death, who have received a death sentence, who have been executed, and to those who have had their death sentences commuted, exonerated or pardoned.

“This campaign is just a glimpse of what women have to face when they encounter a criminal justice system underlined by patriarchal biases,” said Laiba Zainab, communications officer at JPP, a legal action organization based in Lahore that represents the most vulnerable Pakistani prisoners facing the harshest punishments at home and abroad.

The multifaceted campaign will engage different segments of society through various mediums including street performances, radio shows, social media filters and a digital game. The campaign will conclude on Oct. 15 after a performance in Karachi at the Central Jail for Women.

“The gender disparity in Pakistan’s criminal justice system makes it harder for female prisoners as well as women trying to save their loved ones from injustice to fight for the right to due process, effective legal representation and right to health facilities in prisons,” she added.

Families of death row defendants, particularly women, face tough and often traumatic experiences in a system that inherently discriminates against them.

Today’s interaction with the audience, we believe, will leave many empowered with hope and filled with empathy towards such prisoners

Pakistan has almost 4,000 prisoners on death row and thousands of people under trial awaiting sentences for offenses that are punishable by death.

The campaign follows the story of a woman trying to save her husband from the death penalty while navigating Pakistan’s flawed criminal justice system and making impossible decisions. Should she compromise her children’s education to pay the legal fees? Should she relocate to protect her children?

Each component of the campaign allows the audience to enact the perspective of this central female character, making them come face to face with the harsh realities of the lives of the family members of indigent defendants arrested for capital offenses.

“It was a challenge to convert a video game into a play, but street theatre offers a unique energy to engage the audience to interact with a sensitive subject like this,” said Malik Aslam, director and writer of the play. “Today’s interaction with the audience, we believe, will leave many empowered with hope and filled with empathy towards such prisoners.”

Developed by JPP in collaboration with Azad Theatre, the play is scheduled to be performed at community spaces, educational institutes and prisons in Multan, Faisalabad and Karachi.