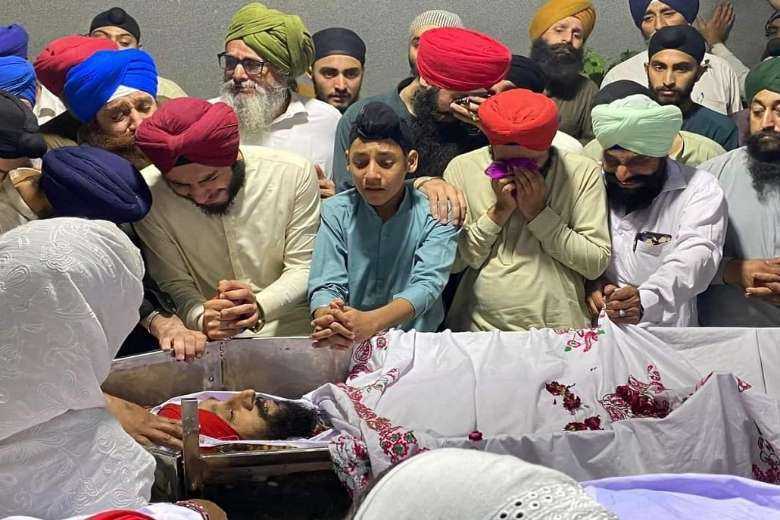 Mourners gather at the funeral of a Sikh trader killed on May 15 in militancy-hit Peshawar, capital of northern Khyber Pakhtunkhwa province. (Photo: Kamran Chaudhry)

Catholic and Protestant leaders in Pakistan's militancy-hit northwest have strongly condemned the killing of two Sikh traders and called for the protection of religious minorities.

Two men on a motorbike opened fire on Suljeet Singh, 42, and Ranjeet Singh, 38, at their shops in the Batta Tal Chowk area of Peshawar, capital of Khyber Pakhtunkhwa (KP) province, on May 15.

Members of the Sikh community, carrying black flags, later staged a sit-in on the Grand Trunk Road. “We want justice,” they cried under the scorching sun.

Twelve Sikh businessmen have been murdered in the last three years, the community leaders claimed.

Shahzad Murad, the vicar of All Saints Church in Peshawar, condemned the latest attack.

“Terrorism has increased despite the new government. However, our province remains under former PM Imran Khan’s Pakistan Tehreek-e-Insaf party. One of our pastors had to be moved to Hyderabad diocese after a similar attack,” he told UCA News.

Reverend Murad referred to Pastor Patrick Naeem who survived a gun attack on Jan. 30 while he was driving home after a Sunday prayer service in Peshawar. His colleague Pastor Siraj was killed.

“Police teams visit the church during prayer gatherings. Twenty-five Catholic volunteers have been trained to protect the worshippers and support the police. Protecting minorities can help improve the image of our country,” he told UCA News.

The Human Rights Commission of Pakistan joined minority leaders in condemning the violence.

“This is not the first time that the Sikh community in KP has been targeted and we demand that the KP police identify and arrest the perpetrators promptly. The government must make it clear that violence against religious minorities will not be tolerated,” the commission said in a statement.