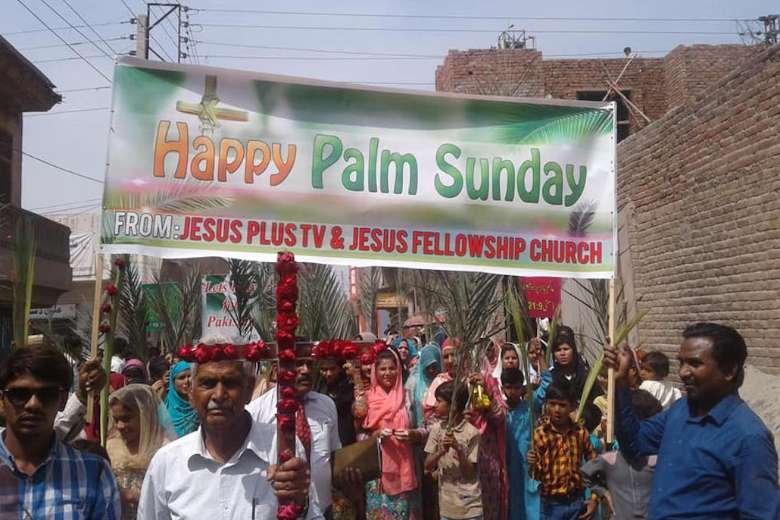 A Palm Sunday procession by Jesus Plus TV in Faisalabad in 2018. (Photo supplied)

The Catholic Bishops’ Commission for Catechetics has warned Pakistan’s minority Christians not to follow churches branded as "Jesus Plus."

“Such terms are for commercial advertisements. But these days the servants of self-made churches include Lord Jesus Christ in the product. The offer is being made to attract the faithful. Such slogans are common on the internet. Is something missing in Christ?” said secretary Emmanuel Neno in a notification issued on April 7.

“This is the era of misleading. Fake scholars are misleading on social media and pushing the faithful into the deep dark well of misinformation. They are offering brand new faith in greed or wealth. You can sense their service to God by their mannerisms.”

Neno referred to Jesus Plus TV International that started in Warispura, a Christian suburb of Punjab's Faisalabad city, in 2003. Its YouTube channel, which offers healing and prayer services, has about 200 subscribers.

Similar channels and ministries have recently appeared in the Islamic republic, where Catholic leaders often complain of persecution and discrimination against religious minorities.

According to Neno, the trend of Jesus Plus churches is increasing in the country. “They are not churches but NGOs,” he told UCA News.

Yedaiah Siddique, a Karachi-based Christian, also condemned them. “For God’s sake, please be careful. Think before naming the channel. Can a great entity be related to names of minus or plus? This is a matter of concern,” he stated in a Facebook post.

“Our name is inspired from the Biblical verses of merging in one body with Christ. There is no minus. We are simply focusing on home-based churches in Punjab to spread the Gospel. More than 300 families are our members countrywide,” he said.