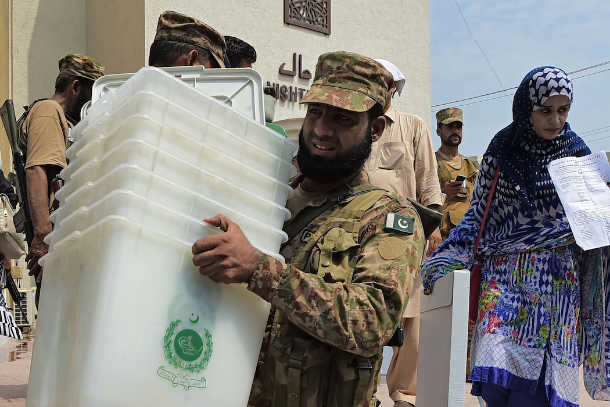 A Pakistani soldier carries ballot boxes at a distribution center in Peshawar on July 24. Pakistan will hold its general election on July 25. (Photo by Abdul Majeed/AFP)

The Catholic Church in Pakistan has urged local authorities to ensure that the general election is held freely and fairly across the country on July 25.

The National Commission for Justice and Peace (NCJP), the Catholic Church's human rights body in Pakistan, said that the church supports democracy and all democratic values.

The commission urged all to cast their vote on the day.

"Democracy is damaged by indifference and by a splintering of society or a fixation on individual interests," said the NCJP. "We share the anxiety of many citizens in Pakistan at the fact that there is an uncertain social climate in the country regarding vital sectors of people's lives, especially regarding health, homes, education, security, the fostering of a solid human values, and international responsibility."

Archbishop Arshad also prayed for peace during the time of elections "so that the people would feel secure to cast their vote without fear or threat of any oppression."

More than 200 people, including three election candidates, have died in a spate of terror attacks this month. Among them was Pakistan Tehreek-e-Insaf (PTI) candidate Sardar Ikramullah Gandapur, who was killed by a suicide bomber in restive Khyber Pakhtunkhwa province on July 22.

Interfaith group Rwadari Tehreek has expressed concern over the candidacy of leaders and activists from banned extremist and terrorist outfits including Mumbai terror attack mastermind Hafiz Saeed's Jammat-ud-Dawah, which is fielding more than 200 candidates.

"Dangerous people who were supposed to be prosecuted and put behind bars for killing people are contesting the general election on dozens of national and provincial seats," said Samson Salamat, chairman of Rwadari Tehreek. "This is the failure of caretaker governments and state institutions including the Election Commission of Pakistan."

The minority Ahmadi community is boycotting the polls over a discriminatory electoral list.

Watch this ucanews.com video for scenes in the lead-up to election day.