Inside his small Bangkok apartment, Shafqat Nasir displayed a 100 baht note. His wife, Babara, sitting beside him, displayed a few coins.

The 113 baht, or about US$3.50, was all they had left after fleeing Pakistan a few months ago.

For the couple, both Catholics, there’s no turning back. They sold their home and belongings and fled Pakistan for Thailand, where they are seeking asylum. Nasir, a member of the All Pakistan Minorities Alliance and volunteer for the Pakistani bishops’ Justice and Peace Commission, received several death threats before deciding to leave his home country.

“I was not afraid. I did not want to leave. But my parish priest convinced me.

“If they can kill Shahbaz Bhatti, you mean nothing to them,” he said, referring to the Pakistani Catholic parliamentarian who was assassinated in 2011.

Nasir proudly showed photographs of himself leading protests in Karachi against the treatment of Christians and against Pakistan’s draconian blasphemy laws, the photos being some of the few belongings he and his wife have left.

He dissolved into tears during a late April interview with ucanews.com, believing his inability to provide a gift to his visitor betrayed the sacred trust of Pakistani hospitality.

“I never wanted to leave. I have nothing here. But at least we can breathe; we’re alive,” he said. “In Pakistan, there is no respect for humanity. If we go back they will kill us; we know this,” he said.

The family is lucky in the sense that their asylum case will be heard by the UN High Commissioner for Refugees by April 2016. The newest arrivals won’t be interviewed until 2018. Until then, survival will depend on luck, grit and the goodwill of their host country.

The couple’s May rent will be paid by the Bangkok Refugee Center, a UNHCR-sponsored site operated by Caritas Thailand. The refugee center will pay their rent for three months; after that they’re on their own. 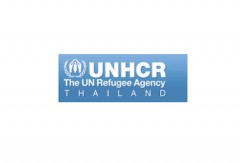 Social service agencies in Bangkok have been scrambling as to how best serve a rapid influx of Pakistani refugees. The community has surged within the past six months from 3,000 to more than 7,000. Thailand, already weary and overburdened from helping thousands of refugees from neighboring countries, lacks the resources to help the newest arrivals.

“If they come here for a better life, this is not the place to be. Their lives are very hard here,” says Oblate Father Ongart Khaeser, field manager for the National Catholic Commission on Migration.

With no documentation or work papers, Bangkok’s refugee community remains vulnerable to arrest and myriad forms of exploitation and abuse.

“It’s not good for them to be outside. They are safe here if they remain hidden. If they go outside, the police can arrest them or demand money. They are prisoners in their homes,” Fr Khaeser said.

The majority of Pakistanis are either Christian or Ahmadi Muslims, a minority sect, who claim to be fleeing religious persecution. They come to Thailand because of the ease in entering the country. They can obtain a visa on arrival, overstay and then seek asylum status. Applications can take years.

Because Thailand hasn’t signed the 1951 UN refugee convention, the new arrivals have limited access to help. The UNHCR offices in Thailand are understaffed asndmost of the agency’s attention lies in Syria and other conflict-ridden regions, refugee advocates say.

Interviews with dozens of Pakistani families in Bangkok reveal the same story: They sell their homes and belongings and arrive in Thailand expecting a quick resettlement to a third country. Within months, and usually weeks, their savings are depleted and they’re left languishing in a small, dank Bangkok apartment, with no money, little food and no hope for employment.

For its part, the Catholic Church has attempted to fill the gap, providing medical care, food and other emergency supplies. The Thailand Catholic Bishops’ Conference has sponsored a number of special collections in Bangkok’s 50 Catholic parishes and is using the funds to pay three months’ rent and provide medical care and other services for the new arrivals.

Caritas also has opened two schools within the past two months. The new schools represent a policy shift by the UNHCR, which is recognizing that the newest wave of asylum seekers will be in Thailand a long time, says Augustinian Father John Murray, director of the center and of the bishops’ migration commission.

The schools serve refugees from all countries. But the rapid rise in refugees from Pakistan provided the impetus for re-assessing the UNHCR’s approach, he said.

While children receive instruction in English and elementary subjects, the schools’ primary focus is to get the students up to speed in Thai so that they can attend government schools. Thailand's school system is open to all, but the students must be fluent in Thai.

At the Bangkok Refugee Center, the cackle of children is heard throughout the agency’s small campus. About 200 children attend school daily. While their parents receive treatment in the center’s medical clinic or meet with caseworkers, the children receive instruction in English, Thai and other elementary subjects.

“One of the most important aspects of this project is it allows these families a sense of normalcy. They can sit in the open air, socialize, gossip. The children can run around and play. Otherwise they stay inside all day; they’ll never see the sun,”  Fr Murray said.

In Samut Prakan province, just outside Bangkok, a third school has opened inside an apartment complex that is home to a couple of hundred Pakistani families. The school, which receives some assistance from the Church and other NGOs, has also resurfaced some of the ethnic and religious divisions that caused the families to flee Pakistan.

Initially started as a collaboration between Christian and Ahmadi families, the school’s administration has been seized by a pair of itinerant Sunni businessmen.

Christian families have complained that they have been pushed aside as the two administrators seek funding and international attention. They also fear that their children are being pressured to embrace Islam at the school, which is supposed to be secular. Christians told ucanews.com that the administration leads children in Muslim prayer and that vocabulary that is specific to Islamic prayers and teachings is used during class instruction. As a result, Christian families have withheld their children from attending the school.

One of the administrators, Muhammad Ejaz, 34, said his goal was merely to “help build community”. Once the school is self sufficient, he plans to move on to the next refugee house and build a new school. He also noted that daily prayer is the obligation of all Muslims and that no student is forced to participate.

But one Catholic parent said the school ignores any input from Christian families and that the administrators are frequently hostile.

“We fled our country because of persecution, because we have no identity. And now the same thing is happening to us here,” a Catholic parent told ucanews.com