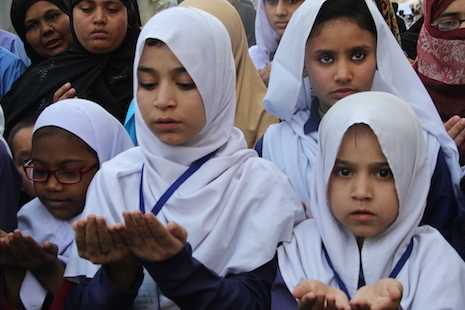 Children in Karachi take part in a remembrance ceremony for those killed in Tuesday's attack on a school in Peshawar (Credit: ucanews.com)

The National Commission for Justice and Peace (NCJP), a human rights body of the Catholic Church in Pakistan, on Wednesday strongly condemned the massacre of schoolchildren in a brutal Taliban attack on an army-run school in Peshawar.

“We grieve and stand with the families of the children affected and killed in this cowardly attack,” said National Director Fr Emmanuel Yousuf Mani and Executive Director Cecil Shane Chaudhry in a joint statement.

A Taliban assault on a military-run school in Peshawar on Tuesday left 141 dead, with 132 children among the victims.

“We are running out of demands for human rights and now plead to the government, political parties, religious leaders, civil society organizations, and judiciary to set aside all their personal and political differences and join hands to end this menace of terrorism,” said the commission’s statement.

The NJCP also called on intelligence agencies and the federal and provincial governments to “take serious and effective measures” to prevent such atrocities and demanded heightened security to “ensure safety of all children and citizens of Pakistan”.

In Khyber Pakhtunkhwa province, Christian groups announced the cancellation of Christmas celebrations and decided to observe the day with simplicity in all Peshawar churches.

The local Express Tribune quoted Ernest Jacob, Bishop of the Orthodox Church, as saying that “We have decided to hold Christmas services and special prayers at all churches of the city and will not hold any celebrations.”

“It is the deadliest assault of the country’s history and the Christian community can never hold religious festivities at such a somber time,” he told the paper.

Bishop Humphrey Peters of the Church of Pakistan said the loss of so many schoolchildren had shrouded the city in grief.

“We endured the same grief when All Saints Church was brutally attacked,” said Bishop Peters, referring to an incident in September 2013 when two suicide bombers carried out an attack outside the church following a Sunday service, leaving more than 80 dead.

In Lahore, Masiah Millat Party, a Christian political party, staged a demonstration against the Taliban and expressed solidarity with the families of those killed in the attack.

Separately, Prime Minister Nawaz Sharif presided over a meeting of parliamentary leaders and decided to chalk out a National Action Plan against terrorism within a week.

He also lifted a moratorium on the death penalty.

Briefing media about the meeting, Prime Minister Sharif said: “Let it be very clear that there will be no distinction between good and bad Taliban.”