Pakistan brings its no-man's-land into the fold 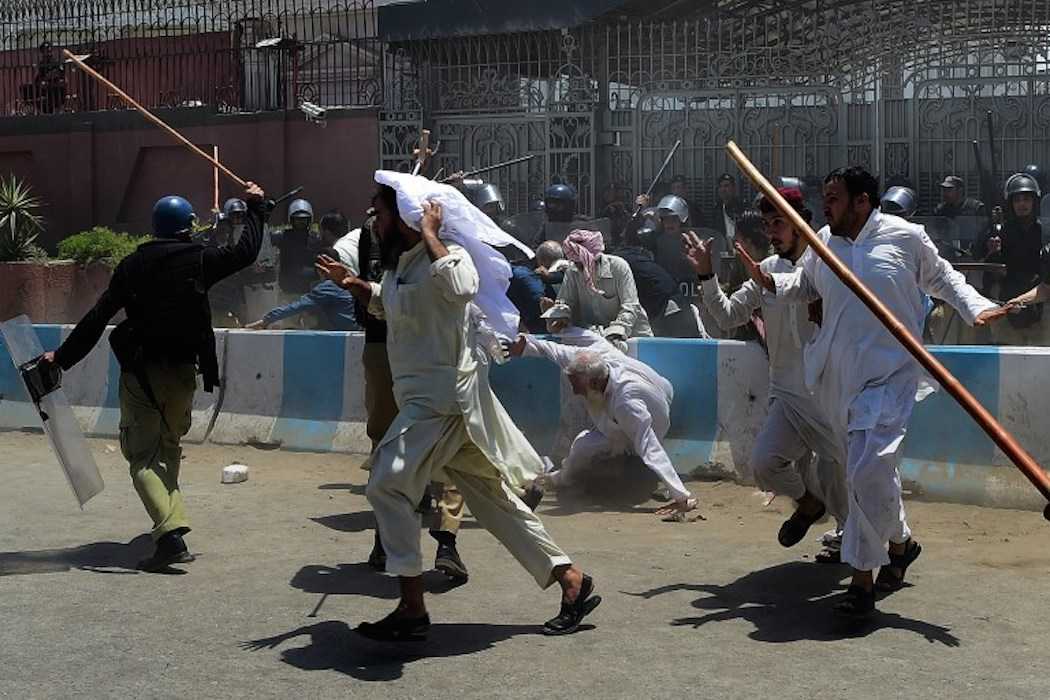 Activists of the Jamiat Ulema-e-Islam-Fazl (JUI-F) party run from policemen during a protest against the amendment bill on the semi-autonomous Federally Administered Tribal Areas (FATA) in front of the provincial assembly, in Peshawar on May 27. Pakistan passed legislation on May 24 paving the way for its restive tribal areas, long a focal point in the global war on terror, to enter the political mainstream. (Photo by Abdul Majeed)

The FATA, which consisted of seven tribal districts located on the Pakistan-Afghan border, was previously under the direct rule of the federal authorities through a set of colonial-era laws known as the Frontier Crimes Regulation (FCR).

These medieval laws endorsed the arrests of an entire tribe or family as collective punishment for the crime of an individual without even giving them the right to appeal.

The region was known as "the land of the lawless" (elaka ghair) throughout the rest of the nation and seen as a safe haven for militant groups in the eyes of the Western world.

On May 31, President Mamnoon Hussain signed the 25th Constitutional Amendment Bill into law, making FATA a part of KP. The word "FATA" will now be removed from the charter.

Meanwhile, in an address directed at the tribes that collectively make up FATA, Mamnoon said they will now be free to enjoy the same rights that are available to other citizens of the country.

"After the merger with KP, FATA will enter a new era of development and prosperity and will bring greater stability to the region," he said.

This also extends the jurisdiction of Pakistan's courts to the formerly ungoverned region and brings it into the national mainstream having representation in both provincial and federal assemblies.

In October of this year, the region is set to choose its representatives through local government elections, the first step towards a complete democratic transition.

The bill has drawn huge praise from rights activists, politicians and the public. Nearly all of the major parties and Pakistan's army backed the historic bill.

This should be seen as a welcome move for there should never have been two parallel systems of governance or justice in the first place.

The FCR was a set of 100-year-old draconian laws that were meant to ensure control over a territory by subjugating the entire population through a process of political exclusion.

Unlike the rest of Pakistan, it hampered the natural growth of the FATA and its five million residents.

It was only natural that the region would become a hub of militancy and criminals thriving on economic opportunities offered by decades of conflicts engulfing Pakistan and Afghanistan and other parts of South Asia.

Over the years, the Pakistan army has carried out at least 10 major military operations and countless peace treaties to bring some semblance of peace to this lawless belt.

This has resulted in the displacement of hundreds of thousands of people, countless human rights abuses and the mining of the area.

According to research by the Bureau of Investigative Journalism in 2014, the drone strikes had been bombing domestic buildings more than any other targets over the past decade.

Over 60 percent of all U.S. drone strikes in Pakistan targeted domestic buildings in the FATA, destroying 132 houses in more than 380 strikes over 10 years and killing at least 222 civilians among a total of 1,500 or more fatalities, it said.

But military operations, absent of a political settlement, were never going to work — and they didn't. There were genuine concerns that the recent military campaign, which improved the overall security environment, would go to waste if FATA wasn't brought into the political fold.

Suffice to say, the people of FATA have served as victims of Pakistan's neglect, flawed security policy and proxy wars fought between world powers in this region.

Pakistan's parliament deserves the praise it has been receiving for passing this historic piece of legislation.

By approving the merger, and ridding FATA of its medieval laws, there is hope the region may return to normalcy.

Surely there will be challenges and setbacks, but those can be overcome over the course of time with persistence and long-term economic investment.