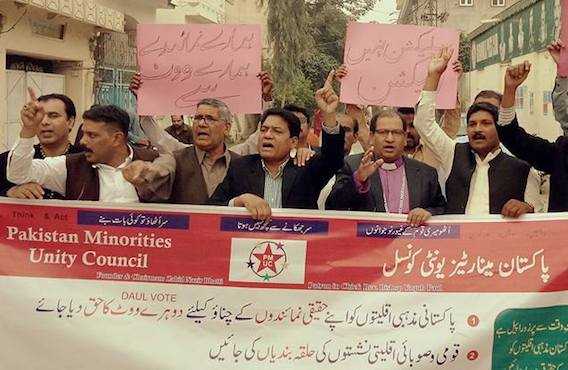 Pakistan Minorities Unity Council members rally at the Gujranwala Press Club, Punjab, on Nov. 10. They are demanding a dual voting system, and an increase in the number of reserved seats in parliament for minorities. (Photo courtesy Zahid Nazir Bhatti)

The Catholic Bishops' Conference of Pakistan has appealed to the government to create a just and fair system for minority candidates before the next general election.

The Bishop's National Commission for Justice and Peace (NCJP) was instrumental in restoration of the 2002 joint electorate system, under which 2.99 million minority voters elect local representation in the national and provincial assemblies. Muslim political parties then select minority MPs through a proportional representation system.

Of the 342 seats in the National Assembly, only 10 are set aside for ethnic and religious minorities. The election is scheduled to be held before Sept. 3, 2018, but no date has been set.

The latest statement from the church's leadership indicates they are not happy with the political parties making appointments.

"We feel that the current electoral system, where minority candidates are being appointed by political parties to reserved seats, does not represent the community and so we urge the government to create a just and fair system," the bishops said in a Nov. 10 statement.

"The upcoming elections, which will strengthen the democratic process, should be as transparent as ever. We cannot hope for a stable government if the elections are not free and fair. The more unjust the elections, the bigger our problems will be in the future. The Election Commission of Pakistan must be totally independent and impartial."

The bishops also demanded "an honest interim government that will bring in fair practices and not interfere with the election campaigns and the voting process."

They also called upon all political parties to address and include issues that concern minorities in Pakistan in order to build a "solid and inclusive democracy."

Relations between civil society and the military in Pakistan are often tense, which has led to political instability and at least three military coups. None of the premiers have completed their five-year term, including Nawaz Sharif who was disqualified by the Supreme Court in July over long-running corruption allegations.

Christians, who total 2.5 million, are the most outspoken of the religious minorities in Pakistan. Many of them partially blame their poor economic conditions on the ineffectiveness of appointed non-Muslim lawmakers.

The 10 representatives of religious and ethnic minorities are often criticized for representing political parties and not their communities and are regarded as token representatives who are excluded from real government decision-making.

"After seven decades, we are marked as slum dwellers and sanitary workers. Our lawmakers are not political, they only favor their own parties and make no policies for lifting up the community. Dual voting is the only solution," said Zahid Nazir Bhatti, chairman of the Pakistan Minorities Unity Council (PMUC).

The PMUC organized two protests on Nov. 11 at the Lahore and Quetta press clubs at which they demanded dual voting, and an increase in the number of reserved seats for minorities.

However, Peter Jacob, former executive secretary of the NCJP, says he was surprised by the bishop's statement.

"They are questioning and discrediting the system without offering a way forward. This is unfathomable and unfavorable. It will only result in diverting attention from the real issues of the community. The real discrimination lies in the constitution and society, not in the political system," he said.

He added that dual voting was a privilege, not a right, and demand for voting privileges for minorities was "a long shot."