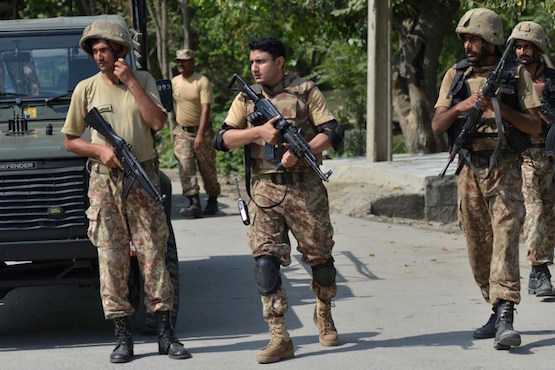 Pakistani soldiers cordon off a street leading to a Christian neighborhood following an attack by suicide bombers on the outskirts of Peshawar on Sept. 2. (Photo by AFP)

The Pakistan army says it thwarted a major terrorist attack at a Christian neighborhood in the country's northwestern city of Peshawar Sept. 2, even as another attacked killed 10 people and injured scores of others.

The attempted suicide bombing took place in the capital of Khyber Pakhutnkhwa Province. "Four suicide bombers with arms and ammunition entered Warsak, a Christian colony after shooting a security guard," a statement by the army's media wing said.

Security forces promptly responded and surrounded the area. An exchange of fire took place and all four terrorists were killed. Two soldiers, a police constable and two civilian guards were injured in the shooting and that the situation is under control, the statement said.

A second attack came three hours later. At least 10 people including police and lawyers were killed and scores of others were injured in a suicide blast in the Mardan district of Khyber Pakhtunkhwa.

The death toll is feared to go up as some of the injured remain in critical condition.

"A suicide bomber first lobbed a hand grenade through a walkthrough gate of the district court before blowing himself up," Faisal Shehzad, District Police Officer of Mardan, told media.

"One group seems to be behind both attacks in Mardan and Peshawar," he told ucanews.com.

Nobody has claimed responsibility for the assault, but suspicions are likely to fall on the Pakistani Taliban targeting Christians.

In September 2013, twin suicide bombers killed more than 120 people and injured 250 more at All Saints Church in Peshawar.

The pastor at that church, Rasheed Nazir, has been organizing annual anniversaries since 2013.

"Terrorism is eating up our country like termites," he said. "We pray for an end to this menace and for the families of the martyrs and injured in this latest attack. Still we thank God for the timely army operation which prevented further loss of life."

Father Abid Habib, former president of the Major Superiors Leadership Conference of Pakistan, urged the government to step up its efforts against jihadists.

"This is a very sad incident. We cannot tell when terrorists will strike next," he said.