The missing could be brainwashed by terror groups, used for sexual purposes or their organs traded, they say 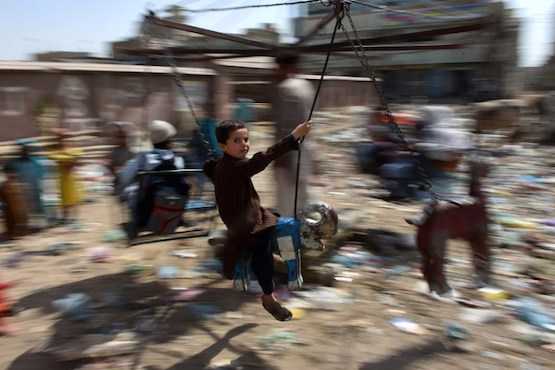 Pakistani children ride on swings in this file photo taken on Feb. 18. Over 200 children have gone missing this year in the Pakistani city of Lahore. (Photo by AFP)

Human rights activists in Pakistan have rejected a police report on the disappearance of more than 200 children in Lahore.

"There is no organized crime behind these abductions. According to our analysis 40 percent of the children ran away due to harsh treatment by parents and only 3 to 4 percent became victims of criminal treatment," Shahzada Sultan, Assistant Inspector-General of Police told media July 26.

"Their report is beyond our comprehension," Samson Salamat, the Christian chairman of Rawadari Taehreek (movement for tolerance) told ucanews.com. "Our fact finding team visited the area last week and met several families. People are still afraid to send their children out."

Fear has gripped the Punjab provincial capital where 208 children — both boys and girls — have disappeared this year. Twenty children have so far gone missing in July in the Bandami Bagh area of Lahore. That area is home to the main bus terminus in the province.

Mutilated bodies of four victims have been found in drains, or wrapped in sacks in garbage. Parents are still protesting in different areas of the city.

Salamat was among several Christian activists who protested in front of the Punjab Assembly calling for the protection of children, the safe and immediate recovery of those allegedly abducted as well as financial compensation to the families of those affected.

One of the protesters held the photo of a seven-year-old boy who disappeared on the third day of Eid Al-Fitr. Four days later, his body was found stuffed in a plastic bag that was dumped in a city drain.

Father Emmanuel Yousaf Mani, director of the Pakistani bishops' National Commission for Justice and Peace also urged both government and police to take drastic steps to ensure the safe return of missing children.

"Even if we believe the police version, the cases of disappearances in recent months is quite high," he said.

"Also, parents should take more responsibility for their children and avoid harassing them at home. Perhaps they need guidance as well about dealing with adolescents in  today's society," he said.

Iftikhar Mubarak of the Children Advocacy Network Pakistan told ucanews.com that children who disappear "could be brainwashed by terror groups, used for sexual purposes or their organs traded. Police should be more open with the truth."

"We are also concerned at the unfriendly attitude towards children in homes, as reported by police. More work should be done to increase the capacities of parents and teachers when dealing with adolescents."

According to the advocacy network, 4,000 boys and girls were sexually abused in the country last year. About 25 million children are out of school and every fifth home has employed a child as domestic help, it said.