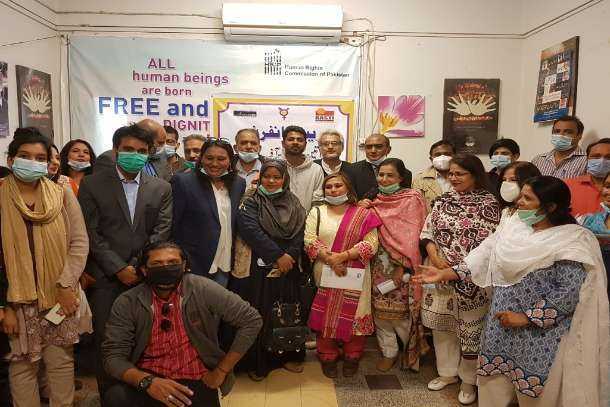 A press conference hosted by RASTI in Karachi with the support of the Awaz Foundation and UJALA Network on Nov. 27. (Photo supplied)

Pakistan’s human rights defenders have presented a charter of demands calling for the inclusion of chapters on early child marriage, sexual violence, harassment and life skills in the school curriculum.

The demands were presented during a press conference on Nov. 27 hosted by RASTI in Karachi with the support of the Awaz Foundation and UJALA Network.

RASTI is a national organization working with children, youth and women to improve their quality of life by providing services in health, education and capacity building on development issues, gender equality, ecology and children’s rights.

Activists said separate courts should be formed for the protection of women and children.

Due to the increasing number of harassment and sexual abuse cases, the government must look at the women’s charter. The school curriculum must include topics on early marriage, sexual abuse and harassment.

Police must also be guided on how to deal with these issues and there must be a separate desk especially for women abuse-related cases in police stations.

The budget for Darul Aman shelter homes must also be increased so that it can help women in need. During the investigation of sexual harassment and abuse cases, the police and judiciary should consider forensic reports instead of eyewitnesses.

The press conference also demanded the government introduce a 24/7 helpline for this purpose.

According to UNICEF, 21 percent of Pakistani girls are married by the age of 18 and 3 percent before 15. Child marriage tends to occur in the country’s most marginalized and vulnerable communities.

Pakistan has the sixth-highest number of women married or in a union before the age of 18 in the world.