Overcoming discrimination against persons with a disability 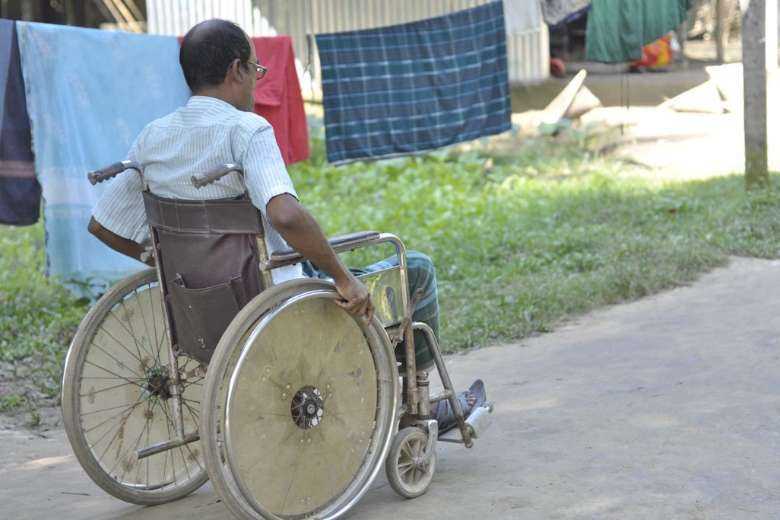 A physically challenged person has come to Kailakuri Health Care Center in northeastern Tangail district with his wheelchair for treatment. People with disabilities are still victims of discrimination in Bangladesh. According to the Social Welfare Department, there are about eight million people with various forms of disabilities in Bangladesh. Independent researchers put the figure to up to 15 million. (Photo: Stephan Uttom/UCAN)

For Sajib Rahman life has been an unending tale of suffering since his birth.

Sajib, 28, was born to poor parents in southern Khulna district in 1992. He was born with his right leg shorter than the left.

His father died when he was 10 and his mother remarried soon afterward. His stepfather was an angry man who considered him a burden and hated him. Now and then, he beat him up, and he even beat his mother when she protested.

One day, he was beaten so mercilessly that his left hand fractured and he cried out loudly, but his mother didn't even bother which stunned him. She also started to behave roughly with him.

“I asked her why she was behaving badly with me. She told that as a disabled I was good for nothing except for destroying their food and resources,” Sajib, a Muslim recalled.

His parents never sent him to school to get an education. Instead, they plotted to evict him from the house forever.

Once he had a high fever and his stepfather took him to a clinic in Khulna for treatment. He was abandoned at the facility.

“If they asked me to leave the house, I could have gone away. But I was cheated on and left out forever. I was extremely shocked,” he recounted.

For three consecutive days, Sajib starved. He begged on the streets for three months to keep body and soul together. He was kicked by people, pushed away by other beggars, and slept on the streets.