About 200 Catholic journalists attended a media focused gathering on May 28 at Immaculate Conception Basilica in Nam Dinh Province. (ucanews.com photo)

A Vietnamese bishop has told Catholic journalists to follow the pope's example for using social media to spread good news and hope in the country where media is heavily censored.

At an event to mark the 51st World Communications Day, Bishop Alfonse Nguyen Huu Long, head of the Episcopal Commission on Evangelization of Vietnamese Bishops, encouraged journalists to be resilient.

"We must be brave to overcome our fears and fulfill the mission of Catholic communication that you are entrusted with," he said.

Reporters are often concerned how "frightening comments and reactions from readers and the authorities," may affect the Catholic community, due to the religious or politically sensitive content of their stories, he said.

"Following the [example set by the] pope, we fear nothing because God is with us," Bishop Long told the gathering of reporters.

He said communication and evangelization are one and the same and "posts with active religious sentiments help to communicate trust, hope and love."

The bishop noted the internet's place as an "indispensable part of people's lives," from children to the elderly.

"I see many ethnic Hmong children, who lack food and clothes and live in shabby houses in remote areas, use smartphones to surf the internet looking for information and learning their language," he said.

Bishop Long described social media as a new space for communicating the good news and hope to people providing Catholics a doorway to truth and faith. 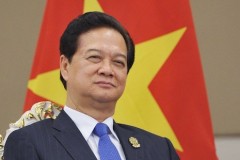 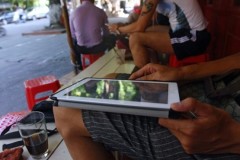 In April, the Ministry of Information and Communication said Vietnam had a population of around 92 million people, 70 percent of whom use the internet, and some 45 million Facebook users.

A journalist from Hanoi Archdiocese said although all 10 northern dioceses set up their own websites, they lack skilled journalists and communication equipment.

Many reporters, therefore, struggle to use computers and digital equipment and often file handwritten stories.

The journalist said dioceses generally publish posts on church activities and avoid issues relating to religious freedom, social injustice, human rights and democracy that are sensitive to the government.

He said many religious groups use social media, especially Facebook, to share information with others, promote human rights and religious freedom, and raise voices of dissent against the government's policies.

Bishop Long said, "The fight between the good and the bad in today's world is fierce." He called on journalists to oppose stories with negative content that spread suspicion, weariness, despair or even defame the church.

The bishop also asked journalists to examine stories through the lens of the good news to deliver messages about Catholic faith to the people.

In August 2013, the Vietnamese government issued a decree banning bloggers and social media users from sharing news stories online saying sites such as Facebook and Twitter should only be used "to provide and exchange personal information."

However, in January 2015, Vietnam's Prime Minister Nguyen Tan Dung conceded it is impossible for the communist country to ban social media, urging officials instead to embrace websites like Facebook to spread the government's message.

Educators from a high school in Long An Province chided a 12th-grader for her public Facebook post complaining about doctors and nurses who had been shouting at patients at a local hospital, state-run Tuoitre newspaper reported, June 3.

In April, Reporters Without Borders, a French-based international organization for journalistic freedom, placed Vietnam 175 out of 180 nations for press freedom.