Indonesian police have named 121 suspects in forest and land burning cases across the archipelago, most of them tribespeople who live in and depend on the forests.

The data was gathered from regional police offices in several provinces from January to August.

The suspects will be charged under environment and forestry laws and could face 15 years in prison and be fined around US$357,000 each. 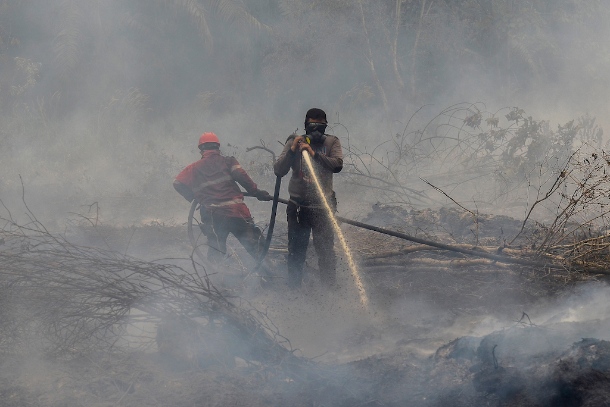 Environmental groups have criticized the police for accusing indigenous people of causing the forest fires.

Frans Sani Lake, director of the church-run Justice, Peace and Integrity of Creation group in Kalimantan, said blaming indigenous people is an act of discrimination by the police.

He said they never burn land on a large scale or for business but to clear the land so that they can plant crops to provide food for their families.

“They have been doing it for ages and they should not be blamed [for huge forest burning],” Lake told UCA News, adding that the new regulations on environment and forestry will harm the people who earn a living from the forests.

“Instead of chasing after individuals, the police should arrest company owners and sentence them to life because they destroy the environment,” he said.

“They collude with security officers who receive payment from the companies to protect their business. This is an injustice. The indigenous people must be released because they are only looking for a living to fulfill their economic needs.”

Lake called on the government to freeze the operating permits of companies involved in forest burning and to take action against security officials who back the companies and criminalize indigenous people.

Rico Kurniawan, a member of the Indonesian Forum for the Environment in Riau, said arresting and naming indigenous people as suspects in forest fires is discriminatory.

“The local government and law officers were very quick to arrest and take legal action against the indigenous people, while corporations are untouched,” he said. “We see there is injustice in upholding the law here.”

He said forest burning is carried out on a massive scale by corporations to clear the way for palm oil and acacia plantations.

“The little people were merely victims of law enforcement,” he said.