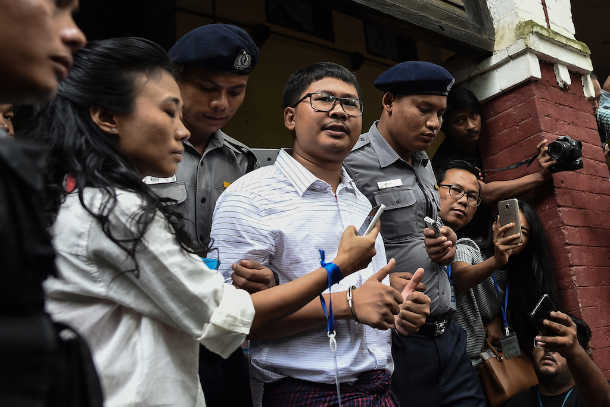 Reuters journalist Wa Lone (center) speaks to the media on Aug. 27 outside a court in Yangon. He and colleague Kyaw Soe Oo were jailed for seven years on Sept. 3 for breaching a state secrets law while reporting on the Rohingya crisis. (Photo by Ye Aung Thu/AFP)

The United Nations, diplomats and press freedom advocates have reacted with dismay to the jailing of two Reuters journalists under Myanmar's colonial-era Official Secrets Act and called on the government to release them.

A court in Yangon jailed Wa Lone, 32, and Kyaw Soe Oo, 28, for seven years each on Sept. 3 for breaching the law on state secrets during their reporting of a massacre of Rohingya.

The pair were arrested last December for allegedly being in possession of police reports. Under the Official Secrets Act, the offense carries a maximum term of 14 years in jail.

The journalists claimed they were framed by police after reporting a Rohingya massacre in a village in Rakhine State.

Knut Ostby, U.N. resident and humanitarian coordinator in Myanmar, said a free press is essential for peace, justice and human rights for all.

"The United Nations has consistently called for the release of the two Reuters journalists and they should be allowed to return to their families and continue their work as journalists," Ostby said.

Human Rights Watch said the conviction on politically motivated charges heralds a return to the media repression seen during military rule in Myanmar.

"These sentences mark a new low for press freedom and further backsliding on rights under Aung San Suu Kyi's government," he added.

Adams called on Myanmar authorities to release the journalists as these convictions "won't hide the horrors committed against the Rohingya from the world — they merely reveal the precarious state of free speech in the country and the urgent need for international action" to free the journalists.

The case has attracted global attention after the journalists exposed the killings of 10 Rohingya men in Inn Dinn village in Rakhine, where more than 700,000 Rohingya were forced to flee their homes after the Myanmar military's bloody crackdown.

Suu Kyi told Japanese television network NHR in June that the journalists were arrested because they broke the Official Secrets Act but it was up to the judicial system to decide whether they were guilty.

The Nobel laureate has been widely criticized for her moral failure on the plight of Rohingya and the recent U.N. report singled her out for her silence over military atrocities against Rohingya in Rakhine.

Some Myanmar netizens welcomed the court's decision to jail the Reuters journalists. "They should be jailed for life as they are traitors to the country," one said. Another added: "Why don't they expose the killings of people by the ARSA (Arakan Rohingya Salvation Army)?"