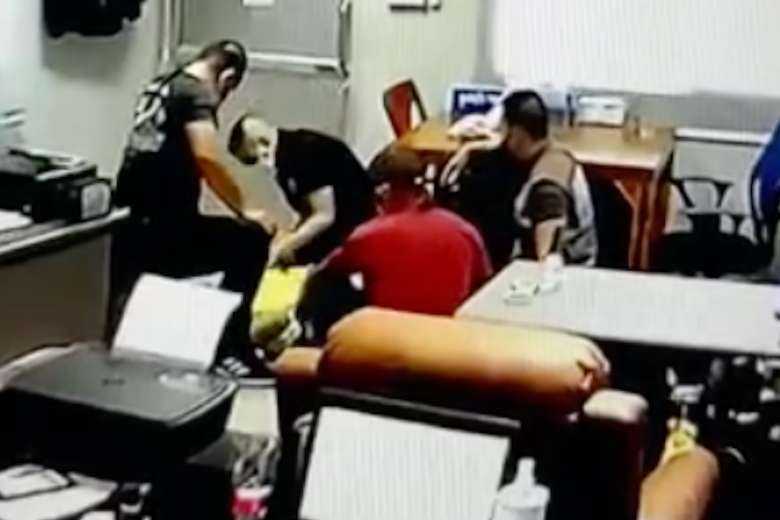 Caught in the act: Thai police officers were recorded torturing a suspect who died from suffocation after a plastic bag was placed over his head. (Photo: Facebook)

Thailand’s police force is facing an outcry after a video emerged online showing a senior officer and six subordinates torturing and then killing a suspect at a station in the northern province Nakhon Sawan in a botched extortion attempt.

In the video, which was posted on Facebook on Aug. 24, a police colonel is seen placing a plastic bag over the head of a suspected drug smuggler, a 24-year-old man, and hitting him repeatedly in an attempt to extort 2 million baht (US$61,000) from him, according to a junior officer who has filed a complaint against the senior policeman.

The suspect, who police said had been arrested with his wife after being found to have 100,000 methamphetamine pills in his possession, suffocated to death.

The policemen allegedly tried to cover up the cause of his death by blaming it on a drug overdose before a prominent lawyer obtained footage from a security camera at the station and posted it online.

The dead man’s wife was released unharmed from police custody after being told to keep quiet about the incident.

“With this video as evidence, I do believe that Thailand has now cemented its place as a truly failed state,” noted one of numerous Thais who have commented online about the case.

“There is no rule of law here, only rule by law. The police are a criminal organization unto themselves,” the commenter added, echoing many other comments.

In response to the outcry, Thai police have dismissed the senior officer, Colonel Thitisan Utthanaphon, and issued warrants for the arrest of all seven policemen. Four have been detained but three including Thitisan are still at large.

However, further revelations have added yet more fuel to the flames of outrage. It has transpired that Thitisan bears the nickname “Jo Ferrari” on account of the several expensive sports cars he owns.

His collection reportedly included a Lamborghini limited-edition Aventador LP 720-4 50th Anniversary special, of which only 100 were produced and which retails for $548,000 in the United States.

Thai police have long been dogged by allegations of endemic graft among senior officers, while officers have also been accused of engaging in extrajudicial killings and other illegal acts with impunity.

However, whistleblowers about criminal acts by police such as extortion often face serious threats.

A former senior investigator who had accused some of his colleagues of abusing their authority and engaging in extortion was shot dead this week outside his house in the southern province of Songkhla.

The 48-year-old man was shot three times at point-blank range in broad daylight by an unknown assailant.

PAUL LANGFORD
I live in Thailand (15 years) and have seen first hand what goes on. While your article is a good one, I am disgusted by the inclusion of a major exaggeration / mistake / lie. The murder of the policeman killed in Songkhla occurred 3 years ago, NOT this week. While his murder was and still is abhorrent, to include it in this article to sensationalize the current disgrace is completely detrimental and disrespectful to his memory, the memory of an honest man in a corrupt system! I believe if you have any integrity, you will retract that statement and apologize.
Reply

SAM HAYMAN
The reason the suspect was tortured was because the police wanted to find out where he kept the money. It's common for Thai police to present the drugs to the media but never the money because they steal it and split it amongst themselves. There have been many drug dealers caught and murdered for not handing over the money.
Reply