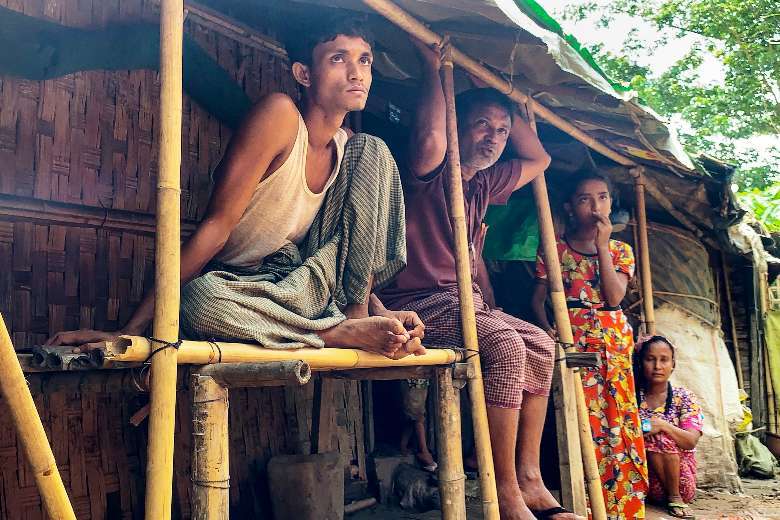 Members of the internally displaced Rohingya community at a camp in Rakhine state. (Photo: AFP)

A diaspora group based in London has decried the Myanmar junta’s plans to withhold Covid-19 vaccinations from hundreds of thousands of Rohingya inside crowded camps in Rakhine state.

“This is a continuation and escalation of the crimes against humanity, including genocide and ethnic cleansing, that have been carried out for decades against Rohingya people,” Tun Khin, president of the Burmese Rohingya Organization UK (BROUK), said in a statement on Aug. 12.

An estimated half a million Rohingya are living elsewhere in Rakhine state where they also face oppression and discrimination.

A local administrator was quoted by Reuters as saying that “authorities in Myanmar currently have no plan to include minority Rohingya Muslims living in densely packed camps as they begin vaccinating priority groups against Covid-19 in western Rakhine state.”

More than 700,000 Rohingya were forced to flee their homes to Bangladesh following the Myanmar military’s bloody crackdown in August 2017 after decades of systematic discrimination, statelessness and targeted violence.

The military junta has been trying to carry out vaccinations following soaring cases in the third wave of Covid-19, which is worsening due to the virtual collapse of the country’s health system.

At least 6,000 people died in the month of July and the junta-controlled health ministry has admitted an average of 300 daily deaths.

However, medical workers and charitable groups said the actual fatalities could be higher with unknown thousands dying from the disease.