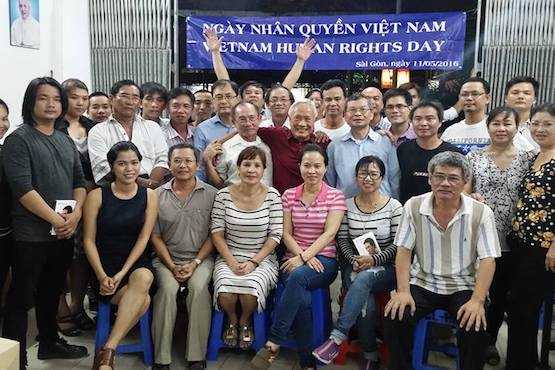 An international press organization has condemned the Vietnamese government for planning to expel an outspoken Catholic blogger and activist who is a dual citizen of France and Vietnam.

Peter Pham Minh Hoang said on June 1 that the French Consulate in Ho Chi Minh City told him that the Vietnamese government has decided to revoke his Vietnamese citizenship, which will result in his deportation to France. Vietnam's President Tran Dai Quang reportedly approved the order on May 17.

France-based Reporters Without Borders said it "is extremely concerned about the Vietnamese government's declared intention to expel Hoang, an outspoken blogger who has French as well as Vietnamese nationality."

Hoang, a university lecturer who acquired French citizenship during many years in France, has been the target of both psychological and judicial harassment since his return to Vietnam in 2000, stated the press freedom organization on June 7.

Reporters Without Borders said Hoang, a member of Viet Tan, a Vietnamese pro-democracy party based in the U.S., posted writings about education, environmental issues and threats to Vietnam's sovereignty from China led to his 17-month prison sentence and three years of house arrest in 2011.

"Reporters Without Borders is appalled by this latest Vietnamese Communist Party attempt to intimidate and silence dissidents. Hoang's announced expulsion is unjustified and out of all proportion," the organization said. "The authorities must reverse this decision, which is typical of the blatant way they harass all those who raise controversial issues."

Reporters Without Borders also urged the French authorities to provide Hoang with support.

Wish to live in Vietnam

Hoang said via Facebook that he felt ill upon learning of the government's plan to revoke his Vietnamese citizenship.

He said it shocked his relatives, especially given that his family is in a difficult situation which he said the government is aware of.

"The Vietnamese government is very callous to strip my right to live in my native country," Hoang wrote on Facebook.

His wife takes care of her elderly mother and disabled brother. "Our family must be separated" if he was expelled, he stated.

Hoang further said he has not received any notification or any reasoning from Vietnamese authorities over their revoking of his citizenship.

Hoang said he felt more distress over being expelled from his homeland than if he had to be imprisoned again.

On June 3, Hoang wrote to the French Embassy in Hanoi stating that he renounced his French citizenship and that he will retain only his Vietnamese citizenship.

"My expectation is to live and die in my homeland," he said.

After north communist forces took control of the south in 1975, he was not able to return to Vietnam until 2000.

As a teacher, Hoang taught five different mathematics disciplines at the University of Technology in Ho Chi Minh City until his arrest in 2010 for "undermining national security" and "ruining the nation's image," through his blogging.