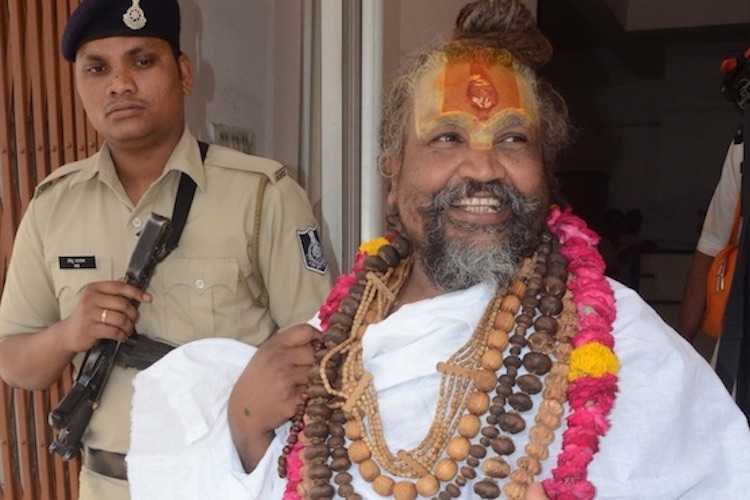 Namdeo Das Tyagi, known as "Computer Baba", leaves a government office in Madhya Pradesh state capital Bhopal on April 4 after he was given the rank of minister of state by the BJP state government. (Photo by IANS)

Muslim and Christian leaders in India have slammed Madhya Pradesh state government for according "minister of state" status to five Hindu religious leaders in what many called a deadly mix of religion and politics in an election year.

The central state's government, run by the pro-Hindu Bharatiya Janata Party (BJP), last week gave minister status to the leaders even though they have not contested or won any election.

The move has snowballed into a controversy as it violates provisions of India's constitution, which expressly upholds secular and democratic values. The constitution does not support unelected people, particularly religious leaders, being appointed to ministerial positions with a paid salary.

Chief Minister Shivraj Chouhan told journalists on April 4, two days after the order was issued, that his government has been making "attempts to bring different sections of society to work for the people."

The new status allows the five Hindu leaders to get salaries and other perks similar to those of a junior minister who is elected to the legislative house. They would also have a greater say in administrative matters in the government.

"This news shocked me. I do not know where our country is heading," said Bishop Gerald Almeida of Jabalpur.

When religious leaders begin to assume government offices and assert themselves in the running of a democratic state, "it is a clear sign that the secular state is on the path of collapse," the bishop told ucanews.com on April 5.

The policy of separation of state and religion continues to be respected across the globe because history is filled with disasters when they were mixed, he said. When "politics is mixed with religion, it is a deadly combination for any nation," he asserted.

One of the five appointed religious leaders is Namdeo Das Tyagi, popularly known as "Computer Baba" because of his interest in electronic gadgets and technology. The others are Bhaiyyuji Maharaj, Narmadanandji, Hariharanandji and Yogendra Mahant.

Baba was not part of the BJP until March when he and Yogendra Mahant announced they would hold a 45-day march from April 1 to protest alleged corruption in the state government planting saplings along the banks of the holy Narmada River that flows through the state.

But the march was cancelled after a meeting with Chouhan. Later they were given minister status and appointed as members of a committee to look after the "tree plantation, conservation and cleanliness campaign."

Some of the newly honored religious leaders are popular in pockets of this Hindu-dominated state and their appeal for votes could help the BJP, which has ruled the state since 2003, in state elections at the end of this year, observers say.

Muslim leader Abdul Rahman Faruqui said the appointments were part of the agenda of the BJP and supporting Hindu groups to make India a nation of Hindus, with the Hindu religion controlling the government and administration.

He said the government might be deliberately creating controversies to divert the attention of the people from real issues in an election year.

"We are witnessing unprecedented protests from farmers seeking the right price for their produce, unemployed youths for jobs and women for security. There are other burning issues that the government needs to address, but without addressing any of these issues they are playing a religious card to win the election," Faruqui said.

Prasanna Jain, a college professor and social observer, told ucanews.com that if the government was serious about involving all sections of society in administration, "such ministerial berths should also be given to Muslim, Christian, Jain and other religious communities."

In a state where Christians and Muslims regularly report Hindu violence against them, the move to give prominence to Hindu religious leaders will be intimidating to religious minorities, he said.

The government should refrain from promoting a religion, said Shaizal Batra, a college professor and member of a Sikh community. He wondered why leaders of no other religion were appointed to such positions.

This preferential treatment of the majority religion will send a wrong signal to the masses that the majority can decide on administrative issues without respecting rules and laws, he added.

Saji Abraham, a leader in the BJP's rival Congress party in the state, said the move was aimed at wooing Hindu votes in the state elections.

"It provides a space for asserting the government's commitment to promote Hindu religion and influence the voters. It is a new trend we have seen in the recent past," he said.

The trend of asserting Hindu dominance gained currency after the BJP came to power in New Delhi in May 2014.

Christians, who comprise less than 1 percent of Madhya Pradesh's 75 million people, live in fear following a spate of attacks on them. According to a report by Persecution Relief, an ecumenical forum that records Christian persecution in India, the state witnessed 52 attacks against Christians in 2017, up from 28 in 2016.