Last week the Vatican found itself at the centre of a controversy over one of the most barbaric human rights violations imaginable — allegations that China forcibly removes vital organs from live prisoners of conscience, for sale for transplant.

The row arose because the Pontifical Academy of Sciences held a conference on organ trafficking around the world, and invited China's former vice-minister for health and current chair of the National Organ Donation and Transplantation Committee, Dr. Huang Jiefu, as a speaker.

Among his other roles, Huang is a member of the Communist Party's People's Political Consultative Conference and deputy director of a secret party committee responsible for providing healthcare to the top cadres. Despite trying to build a reputation as a reformer, Huang is accused of presiding over China's forced organ harvesting; for instance, in 2005 he is on record, in official publications, ordering two spare livers from hospitals in Chongqing and Guangzhou as a back-up for an operation he was conducting in Xinjiang. They were delivered the next morning.

Given that China has no tradition of voluntary organ donors, the idea that two healthy blood-matched livers could be made available within hours strongly suggests a readily available bank of organ sources — almost certainly from non-death row prisoners. Chinese law requires that prisoners sentenced to death must be executed within seven days.

The Vatican conference hit the headlines across major media, from the BBC to The New York Times and The Guardian. Huang admitted to the conference that organ transplants from prisoners still occurs, and Pope Francis cancelled a scheduled audience with conference participants, thus denying China a much-desired photo-op and propaganda coup.

At the same time, a prestigious medical journal, Liver International, retracted a scientific paper from Chinese surgeons about liver transplantation, after it was alleged that organs used in the study had come from executed prisoners rather than volunteer donors as the Chinese authors claimed.

These two events have helped turn the spotlight once more on China's gruesome forced organ harvesting. For over a decade reports have emerged alleging that not only executed prisoners, but prisoners of conscience — primarily practitioners of the Falun Gong spiritual practice but also Tibetans, Uighurs and potentially house church Christians — are targeted for their organs.

Last year, David Kilgour, David Matas and Ethan Gutmann joined forces to produce a new 798-page study, Bloody Harvest/The Slaughter: An Update, based on forensic inquiry into the public records of 712 hospitals in China carrying out liver and kidney transplants — where they say organ harvesting is continuing on a scale far beyond what had previously been thought. They conclude that between 60,000 to 100,000 organs are transplanted each year in Chinese hospitals. The numbers and the extraordinarily short waiting times for transplant patients suggest that prisoners of conscience may be the primary victims. They find that one hospital alone, the Orient Organ Transplant Centre at the Tianjin First Central Hospital, is potentially doing more than 5,000 transplants a year.

"The end of this crime against humanity is not in sight," the authors claim. "The ultimate conclusion is that the Communist Party of China has engaged the state in the mass killings of innocents … in order to obtain organs for transplants." While China officially claims 10,000 organ transplants a year, the authors argue that this is "easily surpassed by just a few hospitals."

Dr. Enver Tohti, a Uighur surgeon now in exile, admits to having conducted one operation to forcibly remove organs from a prisoner. "In China, the government does not treat people as human beings," he said.

Organ harvesting in China has been the subject of hearings and resolutions in the United States Congress, the European Parliament and a debate in the United Kingdom's House of Commons. Last year the UK's Conservative Party Human Rights Commission published a report on the issue following a hearing in Parliament, and the commission's chair, Fiona Bruce MP, introduced a motion calling for an international inquiry, a ban on organ tourism to China and a travel ban on Chinese officials known to have been involved in organ harvesting.

A new film, The Bleeding Edge, depicts the horrors of organ harvesting in China. Starring Chinese-born Canadian actress and winner of Miss World Canada, Anastasia Lin, who adopted the issue as her platform in the Miss World competition, the film is a graphic reminder of the inhumanity of this practice. It also forces viewers to confront the fact that in contrast to most other human rights violations around the world, organ harvesting is difficult to prove in the same way as other crimes. By definition, there are no survivors to interview; their bodies are usually disposed of before their bereaved families are informed, if they are; the only witnesses are the accomplices to the crime and, with some rare exceptions such as Enver Tohti, they don't speak out; and the evidence, in a hospital operating theater, is cleaned away with clinical efficiency.

"On the street, if someone assaults you or steals your purse, you can scream for help," Anastasia Lin told a hearing in the British Parliament. "Tied to a hospital bed in the surgical room of a labor camp, no one can hear your screams. In China, it is the state itself that is involved in organ stealing." United Nations Special Rapporteurs, she added, "have taken up this question and called on the Chinese government to account for the sources of organs. This has not happened. Recent reforms to the transplant system have seen prisoners reclassified as regular citizens for the purpose of organ 'donation' — thereby further obscuring the truth about organ sourcing and concealing gross violations of medical ethics."

This tragic and barbaric practice, she argues, "forces us to confront the question of how humans — doctors trained to heal, no less — could possibly do such great evil?" Her answer: "The aggressors in China were not born to be monsters who take out organs from their people … It's the system that made them do that. It's the system that made them so cold-bloodedly able to cut people open and take out their organs and watch them die. No one is born to be so cruel."

Pope Francis has described the trade in organs as "immoral and a crime against humanity." He was right not to shake Huang Jiefu's bloodstained hand. And the church should support calls for an international inquiry into what David Matas describes as the "mass killing of innocents" and Ethan Gutmann calls "a form of genocide cloaked in modern medical scrubs."

Benedict Rogers is a writer and human rights activist specialising in Asia, and serves as Deputy Chair of the UK's Conservative Party Human Rights Commission. He became a Catholic in Myanmar in 2013 and is the author of six books, including 'From Burma to Rome: A Journey into the Catholic Church.' 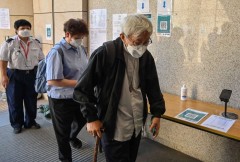 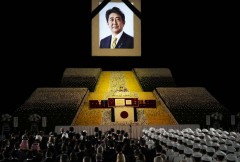